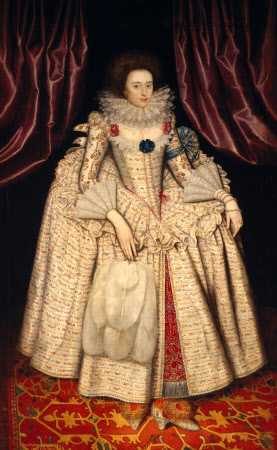 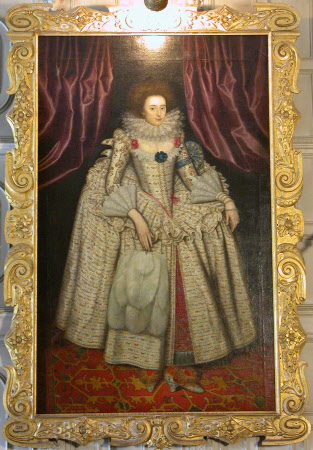 Oil painting on canvas, Mary Curzon, Countess of Dorset (1585 -1645), attributed to William Larkin (London c.1585 – London 1619). A full-length portrait of a young woman, turned slightly to the right, gazing at the spectator, standing on a Turkey carpet between parted curtains, with light-brown frizzed hair, in a white embroidered dress with blue and red rosettes, with a farthingale skirt, revealing a red underskirt, lace ruff and cuffs, a blue rosette at her breast, an ostrich feather fan in her right hand. Pink and gold rosettes on her white satin high-heeled shoes and a blue armband on her left arm with a blue rosette. Inscribed: Mary daughter and heiress of George Curzon of Cox Hall, in the County of Derby, wife to .... (remainder of inscr. concealed by frame). A 1776 copy by William Hamilton is at Kedleston Hall (inv. no. 108775).

She was the daughter and heiress of Sir George Curzon (d.1622) of Croxall, Derbyshire (now Staffs.), and wife of Sir Edward Sackville, 4th Earl of Dorset, to whom she was married in 1612. Her husband succeeded to the title on the death of his brother in 1624, and was appointed Lord Chamberlain to Queen Henrietta Maria in 1628. It was doubtless the influence that this post gave him, as much as his generally powerful position at Court, that secured for his wife in 1630 or 1631 (DNB, s.v. Charles II or Sir Edward Sackville, 4th Earl) the post of 'Governess' to Charles I (b.1630) and future Royal children, for a term of twelve years (although Princess Elizabeth [b.1635] later became her charge, this may be because she was the companion of Prince Henry [b.1639], and there may originally have been a restriction to unbreeched sons [Prince Charles was removed from her care in 1638], since Princess Mary [b.1631] seems to have had her own governess, the Countess of Roxburghe). Parliament continued or renewed her change, by entrusting Prince Henry and Princess Elizabeth to her care on 20 July 1643, with a salary of 600 p.a., and the use of Dorset House and Knole for the purpose, but the children had just been removed from her care and entrusted to the Earl of Northumberland (on 18 March 1645) when she died on 16 May. The removal was no reflection on her, as she was given a public funeral in Westminster Abbey, in recognition of her 'godly and conscientious care and pains' in looking after her royal charges: "The only woman ever honoured with a public funeral by Parliament", according to the inscription on an armorial achievement reproduced in Richard Ussher, An Historical Sketch of the Parish of Croxall, 1881, pl.V.