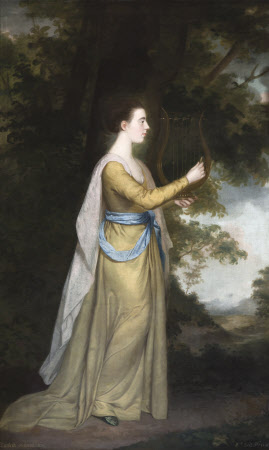 This portrait is one of a series, depicting Delaval family members, which now hang in the Gallery at Seaton Delaval. Elizabeth Delaval was the daughter of Sir John Hussey Delaval, Bt. (1728 – 1808) and Susanna Robinson (1730 – 1783). She married George Thicknesse, Baron Audley in May 1781, as his first wife, and bore him three children. The title was inherited from the Baron’s maternal side, which caused much resentment on the part of his father, who publicly accused him of seducing the daughter of a clergyman. Elizabeth fell ill in the summer of 1785 and died on 11th July, aged 27. For most of his life, William Bell was a provincial painter in Newcastle-upon-Tyne. This series of portraits is undoubtedly his masterpiece, showing him to have been a gifted and individual painter, influenced by Reynolds and Kauffman.

Oil painting on canvas, Elizabeth Delaval, later Lady Audley (1757-1785), playing a lyre in a landscape by William Bell (1735 - Newcastle ?1804), signed bottom right: Wm. Bell Pinx.t and inscribed, bottom left: Elizabeth Delaval. 1774. Full-length, in profile, wearing a yellow dress with a blue sash and a pink cloak, holding a lyre, with a landscape beyond.

Married George Thicknesse, Baron Audley in May 1781, as his first wife, and bore him three issue. The title was inherited from the Baron’s maternal side, which caused much resentment on the part of his father, who publicly accused him of seducing the daughter of a clergyman. Elizabeth fell ill in the summer of 1785 and died on 11th July, aged 27. [see M. Green, The Delavals. A Family History, Newcastle, 2007, pp.98 – 99]. It is not known exactly where these pictures hung, although it seems most likely that they were in the Saloon (there is insufficient space in the Entrance Hall). The daughters are framed in a later and a simpler type of frame (c.1800) than those of Susanna and the two males. It seems possible that their frames were changed in order that they might fit into an alternative location. William Bell is little known for two reasons: that he was for most of his life a provincial painter, in Newcastle-upon-Tyne; and that for half a decade or more, from c.1770 to at least 1775 he was “limner” – the term was as old-fashioned as the mode of employment – to Sir John Hussey Delaval (cr. Baron Delaval of Redford in the Irish Peerage in 1783, and Seaton Delaval in the British Peerage in 1786. Yet these portraits show him to have been a gifted and individual painter, and his London career was much more promising. He was – at the advanced age of 34 – the first student to enter the newly-founded Royal Academy’s Schools in 1769, and won a gold medal there for a painting of Venus Entreating Vulcan to forge Arms for Aeneas in 1771. It seems likely that he was related to Alexander Bell, who carved stonework at Seaton Delaval between 1764 and 1768, and who returned there in 1776 to build the mausoleum. That may have been the connection that brought William to Seaton Delaval, where he not only painted the four original whole-lengths, but also extended earlier family portraits to make a set with them. They all hang in the Gallery, along with the Astley / Hasting chairs and settees upholstered with the Tournament embroidery. Other portraits by Bell are in what is now the main repository of Delaval pictures, Dodington Hall, Lincolnshire. After this activity for Lord Delaval, Bell retired back to Newcastle, and sank into provincial obscurity. He seems, towards the end of his life, to have became the friend of Thomas Bewick, the wood-engraver of Cherryburn (NT). (Amanda Bradley)