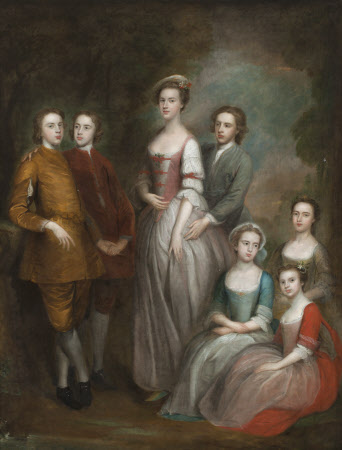 For some time the central figure was thought to be Rhoda Apreece, since her name appears on a tablet on the frame. She must, however, be Rhoda Delaval, especially in light of comparison with Pond’s other portrait of her, in which she wears the same dress, with flowers tucked into her bodice. It seems probable that her other siblings are not shown here because they had been sent away to other family houses, given the space constraints at Seaton Delaval. Arthur Pond was a portraitist (who also painted two views of Seaton Delaval), who was also employed to teach the family how to paint. Rhoda Delaval was a particularly accomplished amateur artist.

The central figure must surely be Rhoda Delaval, especially in light of comparison with Pond’s other portrait of her at Seaton Delaval, in which she wears the same dress, with flowers tucked into her bodice. In addition, the central figure seems to have a demeanor more appropriate to a seventeen-year-old than mother of twelve (if they had all been born by this time). Why, however, are the other children not shown here? We do not know the birth dates for Thomas (d.1787), Henry (d.1760), Robert (d.1759), George (d.1758), Ralph (d.1755), but if they had been born by the time this picture had been painted, it seems conceivable that there was also a portrait of the younger children, that was inherited by some other descendant, and that has either perished or remains to be discovered. In March 1749, however, Pond had already been paid for a portrait just of Rhoda and her three eldest brothers (now at Doddington; Louise Lippincott, ‘Arthur Pond’s Journal of Receipts and Expenses, 1734-1750’, The Fifty-Fourth Volume of the Walpole Society: 1988 [1991], p.304), so the bonds between those four were close enough not to require the presence of any other siblings. The present picture, which must have been painted a little after the last entry in the Journal (November 1750) adds the three remaining girls to this, but no boys – possibly because they were either not yet born, or not out of the nursery.

Accepted in lieu of tax by H.M. Treasury and transferred to the National Trust in 2009