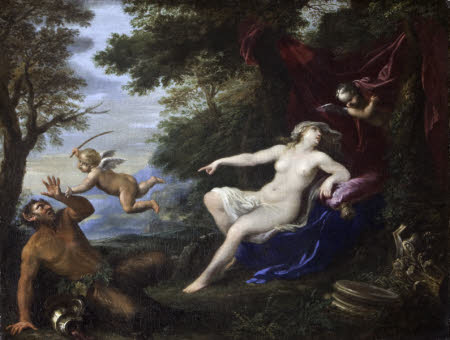 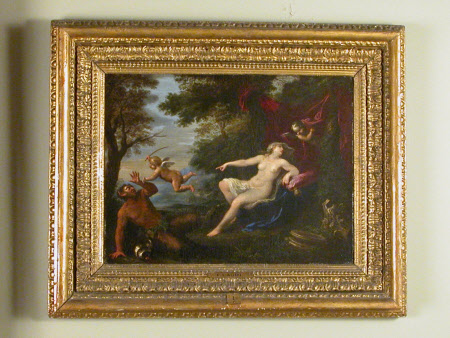 Oil painting on canvas, Amor vincit Omnia ('Love conquers all')/ Venus directing Cupids to chastise Pan, after Filippo Lauri (1623-1694), 17th century. Venus is directing an amorino to chastise Pan, whilst another holds a curtain behind her. A nymph directing cupids to chastise a satyr. This is a variant of a much repeated composition by Lauri, in which Venus orders Pan to be transfixed with the dart of love. See similarities in a picture, Apollo and Marsyas, attributed to Lauri in the Dulwich Picture Gallery, London (Murray, 1983, p. 75)

'Fouquier' [sic according to sale catalogue]; Shugborough sale (Geo. Robins), 9th day (19th August), 1842, lot 59, bought by ?Mandin for Lord Lichfield;and thennce by inheritance, transferred to the National Trust with Shugborough’s park and contents of the state rooms, in part-payment of death-duties to the Treasury, following the death of Thomas, 4th Earl of Lichfield (1883 - 1960)