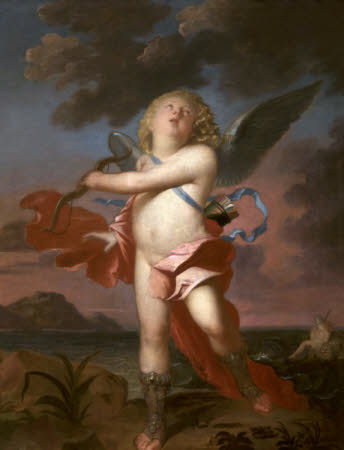 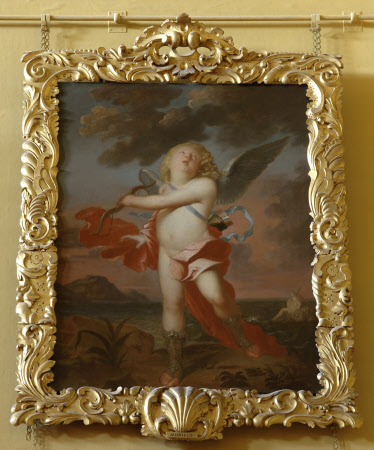 Cupid is the god of love and son of the goddess, Venus. If one of Cupid’s arrows strikes a person he or she will fall uncontrollably in love with the next person they see. At the request of his mother, Cupid is preparing to strike Pluto who is travelling around Sicily. The subsequent result of this is the rape of Proserpine, who Pluto spots picking flowers in a field and takes her off to the underworld. Ralph Bankes (1631?- 1677). recorded in 1659 that he bought ‘A Cupid of Huysmans’ from a Mr Mathewes for £5.

Oil painting on canvas, Cupid preparing his Bow (after Van Dyck), by Jacob Huysmans (Antwerp c.1630 – London 1696). The pretext for the picture appears to be the passage in Ovid's Metamorphoses, Book V, vv.355 ff., Pluto having surfaced from the underworld to circumnavigate Sicily in his chariot to see what damage had been wrought by his struggles to free himself, is sighted by Venus. She promptly urges her son Cupid, to bring about the union of Pluto and Proserpine. Cupid then “selected one of his thousand arrows, the sharpest and surest, and most obedient to the bow. Then, bending his pliant bow against his knee, he struck Pluto to the heart with the barbed shaft.

First recorded in the collection of (Sir) Ralph Bankes at Gray's Inn in 1659; thence by descent until bequeathed by (Henry John) Ralph Bankes (1902 – 1981) to the National Trust, together with the estates of Corfe Castle and Kingston Lacy and its entire contents in 1981