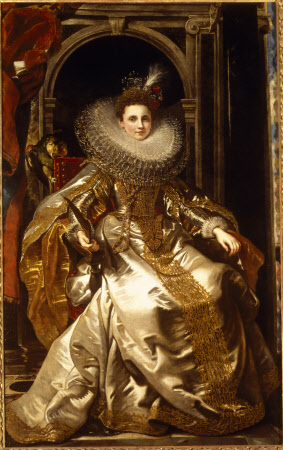 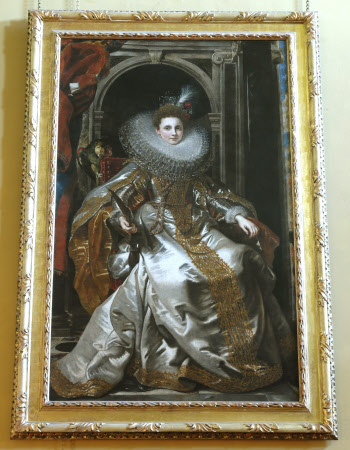 Oil painting on canvas, Marchesa Maria Serra Pallavicino (?) by Sir Peter Paul Rubens (Siegen 1577 – Antwerp 1640), signed on base of niche at left: PETRs. PAVLVS RVEBÑS/ PINXIT AT [Q]UE . SINGULARI DEVOTIÕE/ D./D./ M.D.C.VI . A full-length portrait, given as a gift (D [ono] D [edit]), seated, turned three-quarters to right, facing spectator, her left hand holds the arm rest of her chair and her right hand holds an open fan which is seen in partial profile; wearing an opulent silvery-silk gown, its train falling in vast folds to the left, the gown is laid over with gold embroidered lace which almost entirely covers the bodice and stomacher, and falls in a wide border down the front of the skirt and along the bottom edge; large oversleeves hang from mid arm and fall to the floor. The oversleeves are also embroidered with gold lace, the sleeves are lined with cloth of gold, tight fitting silvery-silk sleeves emerge from the oversleeves and small stiff ruff-cuffs are worn at the wrist. The head emerges from a vast white and silver lace cartwheel ruff, the hair dressed high with flowers, sprays of jewels and a white egret feather. She sits on a red plush high-backed chair the corner of which is seen behind her right shoulder. A parrot is perched on the chair-back and is pecking at a stud on the corner. The background is composed of a stone classical arch with ionic pilasters which are inlaid with dark marble, to the left is a large scarlet drape and to the right is a strip of sky with clouds. One of the first, and most beautiful, of the epoch-making portraits painted by Rubens on his visits to Genoa, this and NT 1257100 were acquired by William Bankes from that city in 1840, as one of the Marchese Isabella and Maria Grimaldi respectively. Those identities would appear, however, to have been conferred upon them by Grimaldi family, which had latterly owned them. When first referred to, in Ratti's guide to Genoa of 1780, they were anonymous. New research into the heraldic motifs of the curtain drawn up above this sitter's head has identified her as Maria Serra, the wife of Niccolò Pallavicino, banker and host to Ruben's employer, Duke Vincenzo I Gonzage of Mantua, whose hospitality in 1606 included a sumptuous banquet and ball, at which she probably wore the lavish dress in which she is portrayed. Hence the fact that Rubens painted this portrait as a gift - (D [ono] D[edit]) - no doubt by proxy for his master.

Inscribed as presented to the sitter by the artist, 1606; recorded by Ratti in 1780 as on the first floor of the Palazzo Centurione in Genoa, occupied by Giovanni Battista Grimaldi La Pietra; acquired by William John Bankes from the Palazzo Grimaldi, Genoa, in 1840; bequeathed by (Henry John) Ralph Bankes (1902 – 1981) to the National Trust, together with the estates of Corfe Castle and Kingston Lacy and its entire contents in 1981