The Four Doctors of the Western Church: Saint Augustine of Hippo 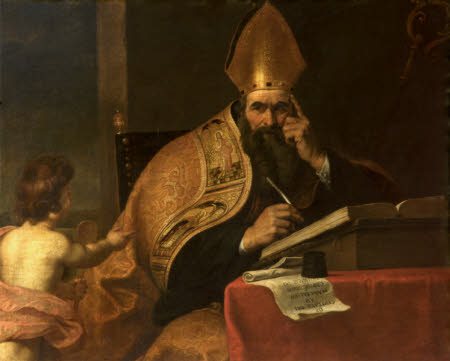 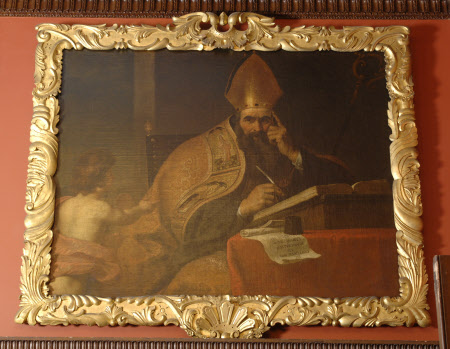 St Augustine, one of the Four Fathers of the Latin Church, is seen writing The City of God, to which DE / CIVITATE DEI / AD / MARCELLIUM / GLORIOSISSIMUM / CIVITATE in DEI, written on the scroll refers. The presence of the child refers to the story when Augustine remarked to a child how futile it is to try to fill a hole in the sand with water. The child apparently replied: “No more so than for human intelligence to fathom the mystery you are meditating.”

Oil painting on canvas, The Four Doctors of the Western Church: Saint Augustine of Hippo (354-430), attributed to Gerard Seghers (Antwerp 1591 – Antwerp 1651). A half-length view, seated, facing right, wearing a bishop's mitre & a cope decorated with embroidered panels. Shown in the act of writing, his index finger pressed against his temple. On the table is a scroll inscribed: DE / CIVITATE DEI / AD / MARCELLIUM / GLORIOSISSIMUM / CIVITATE in DEI. A child stands foreground left, gesturing towards the Saint holding a wooden spoon in his left hand. This refers to the parable of the Trinity. According to this legend, Augustine was walking by the seaside meditating on the Trinity when he noticed a boy using a spoon to transfer water from the sea into a little hole in the sand. The boy explained that he intended to move the entire sea into the hole. "What?" said Augustine, "it is impossible!" To this the boy replied that it would be easier to put the entire sea into that hole than it would be to put "the mystery of the Trinity and his divinity into thy little understanding." according to William Caxton, who found the story painted on an altar of St Austin at the Blackfriars, Antwerp.

first recorded in 1731(?); bequeathed by (Henry John) Ralph Bankes (1902 – 1981) to the National Trust, together with the estates of Corfe Castle and Kingston Lacy and its entire contents in 1981