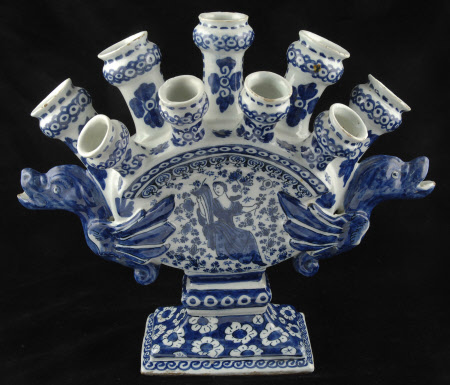 Delft became a major centre of European ceramics after the Ming dynasty collapsed in 1644 and Chinese porcelain could no longer be obtained. Often referred to as a tulip vase, this fan-shaped flower holder with two rows of spouts is one of the best-known Dutch forms.The trend for tulip vases in England was set during the court of William and Mary.

Tulip vase - One of a pair of Dutch Delft Quintal vases of fan shape, with winged beast handles. Painted with Ceres seated among flowers. The tops with one row of five nozzles and another with four nozzles. On spreading rectangular bases. With marks, a connected V and E standing for 'Lambertus van Eenhorn', a connected V and D probably standing for 'van Delft' and an 'R'.