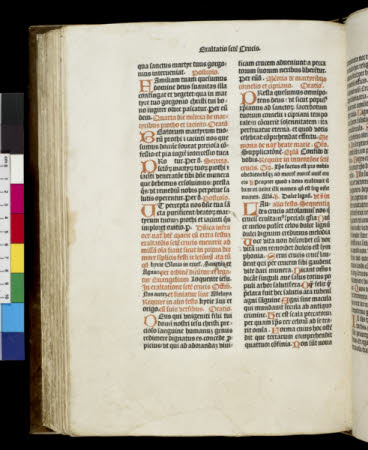 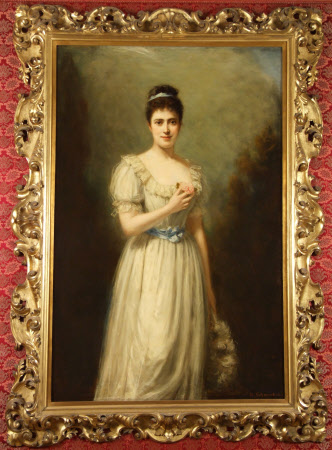 Schmiechen, a German artist, was settled in London as a fashionable portrait painter when he created this vision of the sitter, Margaret McEwan, as a sweetly modest and still unmarried woman. Margaret would go on to marry Ronald Greville (1864–1908) on 25 April 1891. She was presented at Court in May 1892, a year after her marriage, by Ronald’s aunt, the Duchess of Montrose. Ronald died just before he and Margaret were due to move into Polesden Lacey. Mrs Greville never re-married and was known by friends as ‘Mrs Ronnie’.

Oil painting on canvas, Margaret Anderson, the Hon. Mrs Ronald Greville, DBE (1863-1942) by Hermann Schmiechen (b.1855), signed and dated, 'H. Schmiechen 89 (?) [1889]'. A three-quarter length portrait of a woman, turned slightly to the right, gazing at the spectator and smiling, dark brown hair dressed on top with a blue ribbon, wearing a long white dress with short sleeves and a blue ribbon belt with a rosette at the front and holding a rose to her bosom with her right hand and holding an ostrich feather fan by her side in her left hand. Indistinct background, possibly foliage and sky.