The Virgin and Child Enthroned with Saints 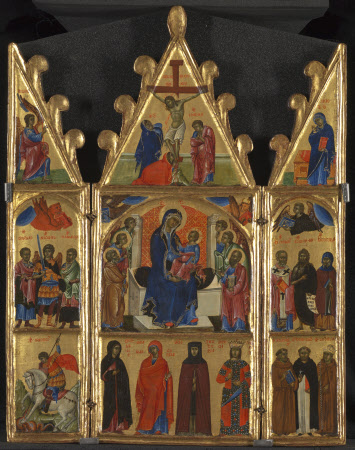 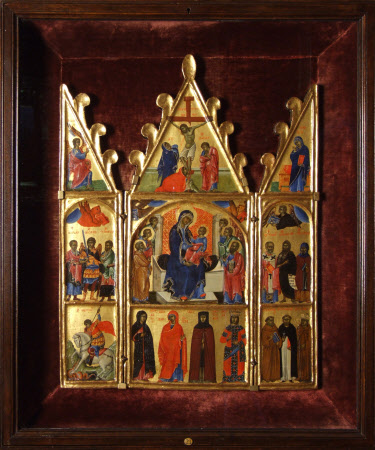 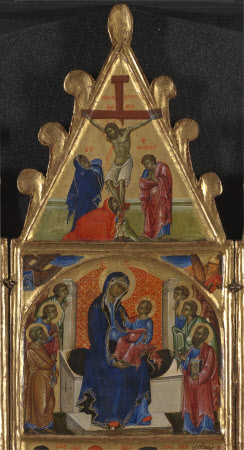 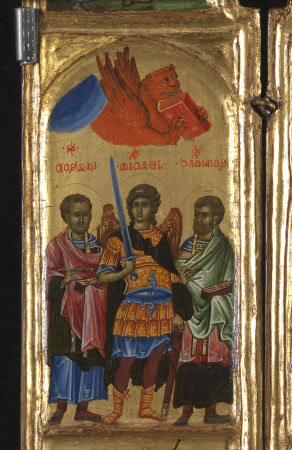 Egg tempera and gold on panel

This unusual, small-scale religious image of the Virgin and Child, Christ on the Cross and multiple saints was probably created as a devotional image. The painting style and format of the image unites two stylistic traditions – Italian and Byzantine. It is likely to have been made for a Venetian patron in the early 1300s by a painter trained in the artistic traditions of Constantinople (now Istanbul), as it includes features common in the Eastern Orthodox Church. The range of saints depicted, not least the highly unusual St Louis of Toulouse (1274–97; the figure at the right in the bottom right-hand panel), would have been chosen by the patron and may have had particular significance to their personal circumstances. The canonisation of St Louis in 1317 has also helped to date the picture. The hinged ‘wings’ of the triptych were designed to close in order to protect the interior images when not in use for prayer and also made it portable.

Egg tempera and gold on panel, The Virgin and Child Enthroned with Saints, Italo-Byzantine School, c. 1317-50. A tempera and gold on panel triptych, made up of three hinged panels with crocketed gables and half-gables. Produced in Venice by a Constantinople-trained master. The gable of the central panel depicts the Crucifixion; below, the top register of the central arch depicts the Virgin and Child surrounded by angels and Saints Peter and Paul, with Saints John and Luke in the squinches; within the bottom register of the central arch are Saints Lucy of Syracuse, Saint Margaret of Antioch, Empress Theodora, and Saint Catherine. The gable of the left wing depicts the Archangel Gabriel, to correspond with the gable of the right wing, which depicts the Virgin, to form an Annunciation. The top register of the left wing depicts the Archangel Michael between Saints Cosmas and Damian beneath the lion of Saint Mark; the bottom register shows Saint George slaying the dragon. The top register of the right wing depicts Saint John the Baptist between Saints Nicholas and Anthony Abbot (Anthony the Great) beneath the angel of Saint Matthew; the bottom register shows Saints Dominic, Francis and Louis of Toulouse.

This early fourteenth-century triptych, made for private prayer and reflection on the life of Christ and the saints, displays a highly unusual mix of Italian Gothic and Byzantine stylistic traits and iconography. Its shape and wooden frame indicate its use for worship with the Latin church tradition. The saints’ names are inscribed in Latin rather than Greek script and the pigments and the rendering of folds in the drapery are in line with contemporary Italian practice. On the other hand, the modelling of the faces derived from Eastern Orthodox painting traditions. Some of the saints that have been included, notably Saint Theodosia, are more commonly associated with Constantinople than Western Europe. In the case of Saint Louis of Toulouse (who was canonised in 1317, providing an earliest possible date of creation), the opposite is true. This mix of the visual traditions of the Eastern and Western churches has led to multiple theories about the origins of the triptych. It has been regarded as a work made at the border of Byzantine and Italian spheres of influence on the Dalmatian coast and as the work of a Byzantine painter in Constantinople or Venice working for an Italian patron (Frinta 1997; Byztantium, exh.cat., no. 223). It has also been proposed that the work was painted for the royal court of Naples in Rome, Siena, or Naples by a travelling Greek artist (Corrie 2006). More recently, Michele Bacci has proposed that the triptych should be regarded as the work of a Greek painter working in Venice according to the precise directions of a Venetian patron (Bacci 2013). All the saints featured, including Theodosia in fact, were venerated in the city and were within the range of figures that a Venetian could have chosen for inclusion in their personal devotions. Preference in these selections were given to the saintly namesakes of the patron or their family members, or to holy figures associated with significant places or events in their lives. Furthermore, Eastern Orthodox icons were influential on art made in Venice for longer than in other parts of the Italian peninsula, and there is evidence that they were regarded as peculiarly efficacious as religious tools in the Veneto well into the following century (Bacci 2013, pp. 209-10).