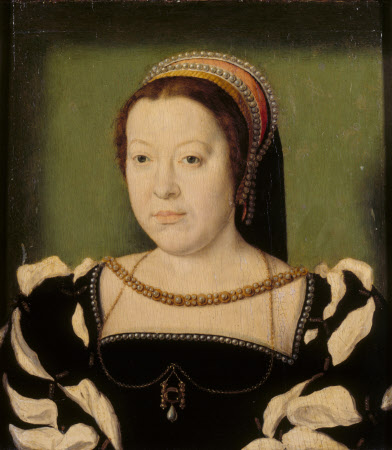 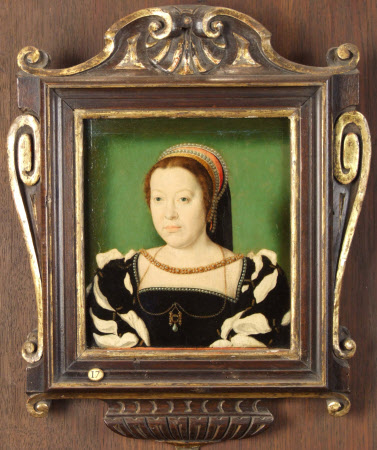 Daughter of Lorenzo de' Medici, Duke of Urbino, wife of King Henri II of France, and Regent after his death in 1559. Catherine is shown wearing a jewel around her neck in the shape of a letter ‘H’ as an homage to her husband. The picture dates to about 1536 when the royal court was in Lyon and Catherine became Dauphine (the wife of the heir to the French throne) following the death of her brother-in-law.

Oil painting on oak panel, Catherine de' Medici (1519–1589) by Corneille de Lyon (The Hague 1500/10 – Lyons 1575), circa 1536. A bust-length portrait of a middle aged woman, almost facing, wearing a black dress with white showing throught slashed sleeves, the border of the dress edged with pearls; her pink cap is also decorated with pearls; round her neck is a gold chain and at her breast a jewel in the form of an 'H'; green background. The oak support appears to be a later backing-panel, bevelled, and hollowed-out, into which the original panel has been inset: visible as three thinly-incised lines at the top and on the sides, and abutting the stave, coloured red in front - see NT 1246458 - yet the paint appears to be original and continous over the whole surface - save over the bottom stave.

on top bevel, red wax seal with serpentine snake, denoting Jean-Baptiste Colbert, marquis de Torcy Colbert; paper inscribed 974 over the bottom [something like a Belton label, but the numbering of these does not go as high]; in thick black paint, on the same bevel: 35; in thin black paint below this, on flat back: [-] 6 [--]; below, label of Monarchs of Great Britain Exhibition, New Gallery, 1902, as ‘Mary Tudor, Duchess of Suffolk by Holbein’, lent by The Earl Brownlow, Ashridge Park; reg. No. 312. On panel in ink 413 EW,35 and 61