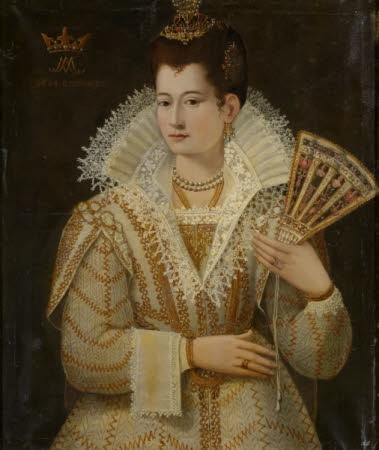 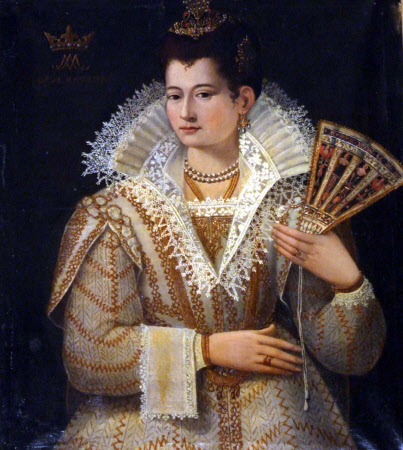 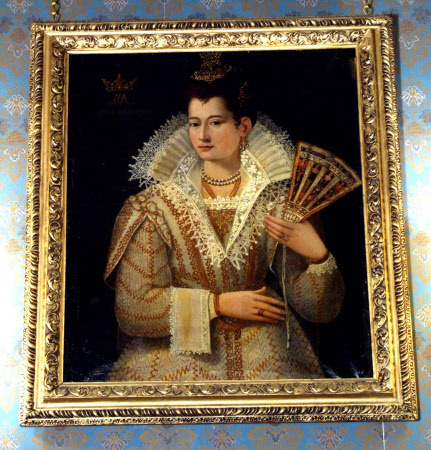 Oil painting on canvas. An Unknown Lady aged 23, called ‘the Countess Miranda’ by Italian (Florentine) School, inscribed on canvas with monogram 'MA' or 'AM' (under a monogram formed of two M's, under a coronet; bottom right: 165; in chalk on back of canvas: 639 - 'Aet 23 Anno 1571. A three-quarter-length portrait of a young woman, facing, head turned slightly to the left, gazing at the spectator, her right hand at her waist her left hand partially raised and holding an half-opened highly decorated fan. Her dark hair is dressed on top with a small crown, and she is wearing in a richly gold embroidered white dress, with gold braiding, and a high, V-opening high-standing lace collar, with lace cuffs, and lace napkin over her right forearm, she wears rich jewellery, gold chains, and an aigrette or small crown on her head. The subject shown at the age of 23 in 1571, according to the inscription. Once thought to be Spanish, and known as Countess Miranda, it is now thought to be Italian. The form of the crown at the top right is that of the Grand Dukes and Duchesses of Tuscany, so it may be of Camilla Martelli (1545-90), second wife of Cosimo I, although her dates do not fit. White catalogue number '165' l.r.