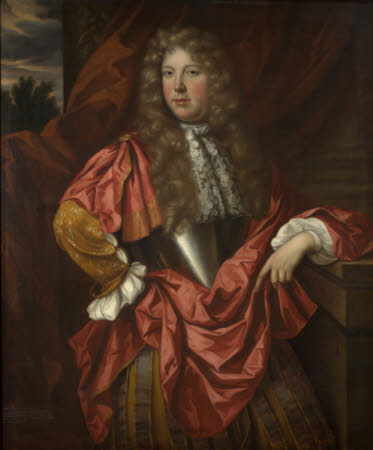 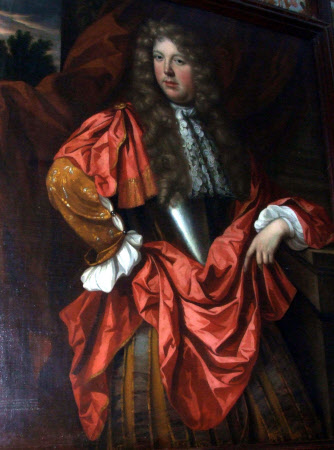 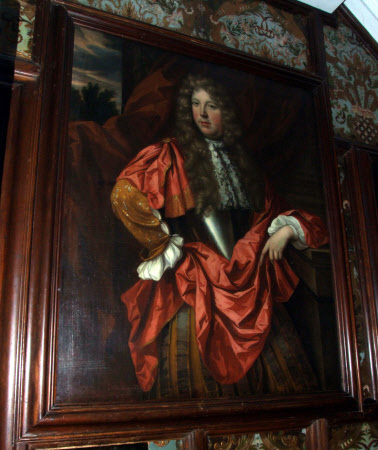 Sir Henry Bedingfeld, 2nd Baronet, spent considerable sums improving Oxburgh and its grounds following their partial destruction during the Civil War but was never compensated for the financial losses suffered by the family during the conflict.

Oil painting on canvas, Sir Henry Bedingfeld, 2nd Bt (1636-1704), British (English) School, circa 1680. A three-quarter-length portrait of 'Great Sir Harry' as a young man, standing, turned slightly to the right, head half turned to the left, gazing at the spectator. He has his right hand on his hip and left arm is bent, to rest on a stone ledge, behind which part of a classical column can be seen. His left hand holds up a fold of his scarlet cloak which is draped fastened on his right shoulder, alla romana, over a steel curaisse, and he wears a rich lace cravat. His white sleeves appear from beneath a gold embroidered coat and he has yellow and gold breeches with thongs also alla romana. A crimson curtain is draped behind him to the right and a landscape is visible through a small window, top left. Inscription l.l. 'Sir Henry Bedingfeld Bt, he came over with the Duke of Gloucester at the restoration being that Duke's chief favorite. He married 1st the Lady Ann Howard, daughter to the Loyal Earl of Berkshire who died at Paris, 2nd Elizabeth, daughter of Sir A Arundell of Lanhorne. He died 1704'. He married firstly, Anne, daughter of Charles, Viscount Andover, later Earl of Berkshire (d. 1682) and secondly Elizabeth, daughter of Sir John Arundell. Died 14th September 1704. He had no children by his first wife, but - according to his monument - one son (Henry Arundell, the 3rd. baronet), and three daughters (two of whom were living when he died) by his second.