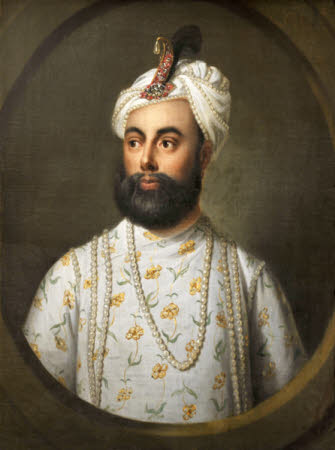 The identity of the man in this portrait is uncertain. Traditionally, it has been referred to as Prince Azim-ud-Daula, Nawab of the Carnatic (1775-1819), though the facial appearance is markedly different from another portrait more confidently identified as that sitter (NT 1180953). Another candidate is Umdat-ul-Umara (1748-1801), the previous Nawab of the Carnatic region, who held that position from 1795 to 1801. There is a strong resemblance with a portrait of Umdat by the British artist Tilly Kettle, sold at Christie’s in 2000. Umdat ul-Umara was an ally of the British East India Company and had close connections with Clive of India. However, this relationship turned sour in 1799 when he was accused of betraying the British by collaborating with Tipu Sultan. He died in mysterious circumstances only two years later, in what was rumoured by some to have been a deliberate poisoning.