View of Verona from the Ponte Nuovo 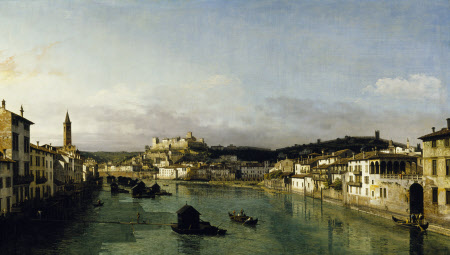 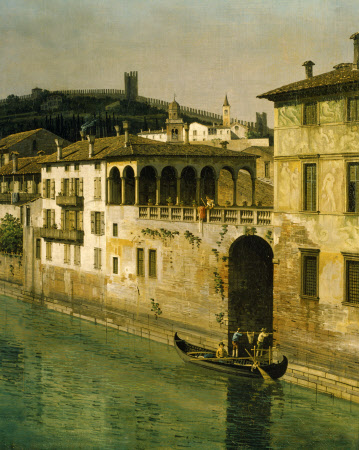 Oil painting on canvas, View of Verona from the Ponte Nuovo by Bernardo Bellotto (Venice 1722 – Warsaw 1780), 1745-47. This view is from the Ponte Nuovo looking upstream over the Adige towards the north, the Castel San Pietro in the middle distance and the Tower of Sant'Anastasia on the left. At the far right, on the east bank, is the Palazzo della Seta decorated with sixteenth-century frescoes. Anchored in the river are floating mills for grinding corn. The pendant picture, The Adige at Verona with the Ponte delle Navi, looking downstream in the opposite direction, to the south, once in the collections of George Agar-Ellis, 1st Baron Dover (1797-1833) and General Sir George Burns at North Mimms (where it was first recorded in 1895), sold at Christie's, 26 November 1971, lot 30, the buyer was 'Ray', is on loan to the National Gallery of Scotland. There are two smaller versions in Germany.

Robert, 1st Baron Clive of Plassey (1725- 1774), by 1771 and recorded as hanging in Clive's London house, 45 Berkeley Square in 1775 and at Powis by 1798; by descent to his son, Edward, 2nd Lord Clive, 1st Earl of Powis of the 3rd creation (1754 - 1839), who married the Powis heiress, Lady Henrietta Herbert in 1784; thence by descent; when Powis and the majority of its contents were transferred to the Trust, it remained in the ownership of the family; when offered for sale in 1981, its acquisition by the Trust was made possible by grants from National Heritage Memorial Fund and the National Art Collections Fund (Art Fund) (including from the Wolfson Foundation), and Grant-in-aid administered by the V&A (Purchase Fund)