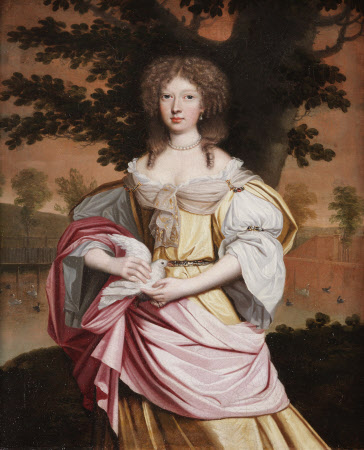 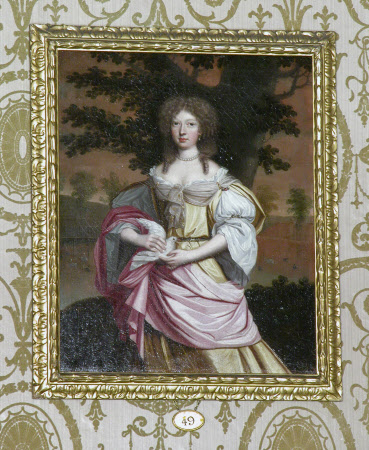 Oil painting on canvas, Mary Wilbraham, later Countess of Bradford (1661-1737) after John Michael Wright (London 1617 - London 1694), circa 1680. A reduced copy of a portrait from Weston Park. A portrait of a young woman, three-quarter length, standing, turned very slightly to left, facing frontally, gazing at spectator, curled hair falling into ringlets on both shoulders, drop pearl earrings, single strand pearl necklet, wearing a yellow dress over a white shift with a pink cloak, holding a dove in both hands, the dove facing to right, his left wing extended, landscape background with trees, and a lake with waterfowl. Held by a young unmarried girl, a dove is likely to be a symbol of purity (by analogy with the pair presented for the Purification of the Virgin). She was the younger sister of Grace Wilbraham (CHI/P/48). She married Richard Newport, 2nd Earl of Bradford in 1681 and was the sister in law of Sir Thomas Myddelton, 2nd Bt.

With some of the contents, in 1978, that were acquired along with Chirk Castle from Lt-Col Ririd Myddelton (1902–1988) by the National Land Fund and handed, on loan for 99 years, to the Secretary of State for Wales (In 1981 Chirk was transferred into the ownership of the National Trust)