The Interior of a Cathedral 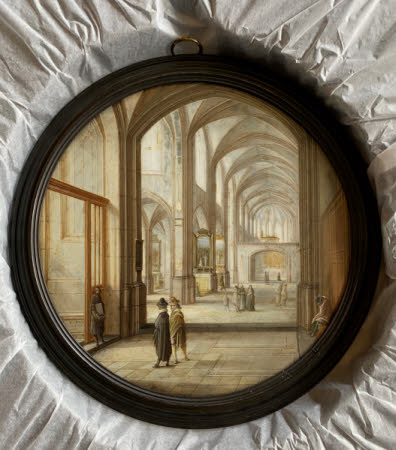 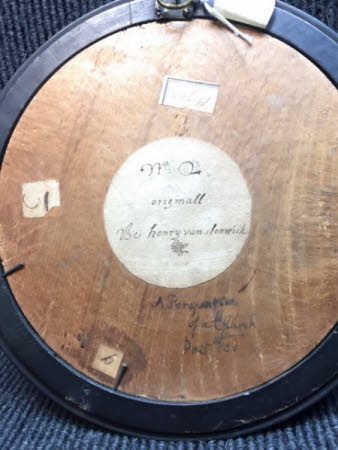 Oil on copper, The Interior of a Cathedral, Hendrick van Steenwyck, the Younger (?Antwerp c. 1580 - 1649? Leiden), signed and dated 'H·V·Steinw / 1621' on stone seat, bottom left. A circular view of the nave of a cathedral from the entrance with standing figures and a seated man, sleeping, at right. In the original ebonised fruitwood frame.

Hendrick van Steenwyck was a painter of church interiors and architectural scenes. Probably taught by his father who had fled the Netherlands and settled in Frankfurt, van Steenwyck was in London by 1617. His London base, where he appears to have stayed for some twenty years, put him in a unique position to supply the niche demand for this genre amongst British collectors. William Murray of Ham (c. 1600-55) was an early acquirer of his work, along with Charles I. By 1645 van Steenwyck had settled in the Northern Netherlands, where he died. This small fine work is signed and dated 1621. The architectural space is based on Antwerp Cathedral, fusing the real and imagined to heighten the sense of scale and the play of light between the spaces. It is one of a small number of works depicting churches that van Steenwyck painted in a circular format. It is also one of only three that are painted on a copper support. The practice of painting on copper, popular with artists producing cabinet pictures in the seventeenth century, allowed an artist to produce particularly fine details (something that was highly suitable for smaller pictures) and it also added a luminosity to the pigments, which is evident here. Originally built in 1610, Ham House is the creation of an enterprising courtier, William Murray, and his daughter Elizabeth (1626-98). As a boy, William was educated with the young Charles I, remaining friends as adults; William was given the lease of Ham House and its estate as a gift from the King in 1626. William, and later his daughter Elizabeth, transformed Ham into the house we see today; a rare 17th century survival of luxury and grandeur. William Murray created the Green Closet at Ham in tandem with Charles I's Cabinet Room at Whitehall. Inventories show that they evidently exchanged works. The king owned at least a dozen paintings by van Steenwyck. The artist was also a friend of Edward Norgate, with whom Murray had dealings, and the predominance of his perspectives at Ham suggests that Murray and the artist were directly acquainted. The Green Closet at Ham is itself a rare and hugely significant survival. The site for displaying fine works by important artists, it provides a unique and concentrated introduction to the fashions of the early 17th century court. Exquisite pictures of this quality were highly desirable objects for elite collectors to own and display. Being seen at Ham by the royal family and by the most influential members of the court, they would have served to highlight the importance and richness of the collection. This painting was certainly at Ham House from 1683 and is likely to have been bought by William Murray. According to the inventory of c.1683, it appears to have hung in Elizabeth’s private closet and thus was evidently prized by her. It continued to determine collecting at Ham House well into the 18th century, as demonstrated by the acquisition of the portrait of Antwerp Cathedral by Peter Neefs the younger (NT 2900121), bought by the 4th Earl of Dysart in 1748 (and reacquired for Ham in 2015).