Elizabeth Murray, Lady Tollemache, later Countess of Dysart and Duchess of Lauderdale (1626-1698) and an Attendant 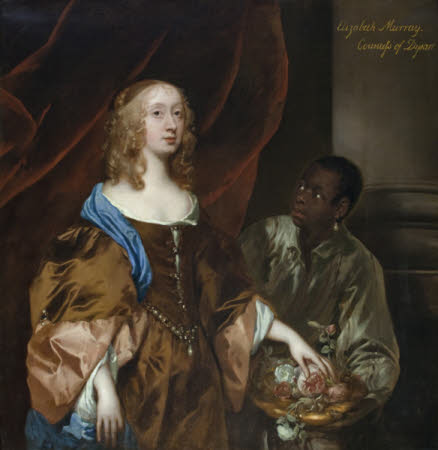 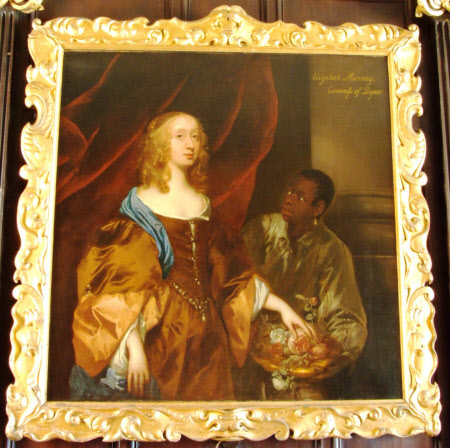 Oil painting on canvas, Elizabeth Murray, Lady Tollemache, later Countess of Dysart and Duchess of Lauderdale (1626–1698) and an Attendant by Sir Peter Lely (Soest 1618 – London 1680), circa 1651. A three-quarter-length portrait of a young woman, turned to the right, her right hand by her side, her left hand resting upon roses which are being proffered to her by an attendant, possibly a servant, who looks up at her. She wears a brown bodice fastened down the front with jewelled clasps, a jewelled waistband with a large pearl suspended at its centre, voluminous sleeves with pink lining and pinned with jewels, and a blue shawl over the proper right shoulder. Her hair is styled in loose ringlets by the ears and a chignon. The attendant wears a white silk shirt with full sleeves and a pearl drop earring in his left ear. A large red velvet drape is swept up behind her and there is a large stone pillar which occupies the right background. For the frame see NT 1140614.

Elizabeth Murray (1626–98) – successively Lady Tollemache (m. 1648), 2nd Countess Dysart in her own right (1655) and Duchess of Lauderdale by marriage (1672) – was painted on multiple occasions by Sir Peter Lely. Lely is best known as a portraitist who, as Charles II’s official Principal Painter, produced a huge body of work and became the chief image-maker of Restoration Britain. In 1661, he was appointed Principal Painter to Charles II. Soon his portraits of women – characterised by sensuous exuberance, richness of colour and supple handling of flesh – came to epitomise the idea of beauty in England. Lely painted Elizabeth Murray twice as a young woman. The first time, she was in her late teens (see NT 1139764, also at Ham House). The second time, in this portrait from around 1651, she is a young wife – Lady Tollemache – depicted at the height of fashion and luxury. [1] Her fine clothing is punctuated with jewels: her bodice is joined together by jewelled clasps; a large pearl hangs from the centre of her jewelled waistband; her voluminous sleeves are pinned back with yet further jewels. The presence of pearls and roses in close proximity to Elizabeth’s womb can be read as symbols of fertility and abundance. [2] Elizabeth would have a total of eleven children by her first husband, Sir Lionel Tollemache, 3rd Bt, whom she married at the age of twenty-two. This portrait, which dates to around 1651, may commemorate the birth of Elizabeth’s second son. In addition to being symbols of fecundity, the pearls are conspicuous displays of prosperity. Wealth is conveyed not only by the presence of luxury objects, but also by the presence of the attendant – an unnamed, young man of African descent. He steps out from behind a curtain, leaning over to present her with a gold platter of pink and white roses. He wears a lustrous silk shirt, with striking gold stripes. A large pendant pearl hangs from his earlobe, echoing the pearl that is suspended from Elizabeth’s waist. This was an era that saw the conflation of human beings with new world commodities in the transatlantic slave trade. As such, attendants of African descent were included in 17th-century portraiture as symbols of prestige and ornamentation, much in the way that pearls and other luxury possessions were. The status of these figures is difficult to determine. Some may have been salaried servants but many were enslaved. Most were unnamed and unrecorded, and in some instances, it is unclear if the figures were real individuals or instead were pictorial devices, modelled on existing representations. In the case of Lely’s portrait, the status and identity of the Black attendant is unknown. He does not wear a metal slave collar (a clear indication of enslavement) nor does he wear livery (a hallmark of domestic servitude). Although lacking these ostensible markers of servitude, the attendant is nonetheless rooted in an established portraiture motif: that of the aristocratic white female sitter and an accompanying, enslaved Black subject. Evident in many other portraits from the 16th and 17th centuries [3], this convention includes the attendant’s crouching posture, his proffering gesture, his liminal status emerging from behind a curtain, and his unfaltering gaze toward the named sitter. Household documentation suggests enslaved, or formerly enslaved individuals may have formed part of the Elizabeth’s household. In a list of Ham House’s servants from 1668, a ‘Page’ and one of two ‘Footmen’ do not have wages against their names. [4] This documentation of unwaged (and therefore enslaved) people suggests that the attendant in Lely’s portrait, painted some 17 years earlier, could in fact have been a real, enslaved person, and not merely a pictorial flourish by the artist. Later in life, Elizabeth, as the Duchess of Lauderdale, would become closely connected to overseas trade and colonialism by her marriage in 1672 to John Maitland, 2nd Earl of Lauderdale. Maitland had been a signatory on the 1663 Royal Charter founding the Royal English Merchant Adventurers Company Trading to Africa (later the Royal African Company), which had a monopoly on the trading of enslaved people, and of ivory and gold along the west coast of Africa. Lauderdale also held official positions which connected him closely to trade and early colonialism, including Commissioner of the Council of Trade (from 1668), Commissioner of the Council of Plantations (from 1671) and when founded in 1675, one of the Lords of Trade and Plantations. [5] Gabriella de la Rosa 2020 Notes [1] See Christopher Rowell, ‘The Duke and Duchess of Lauderdale as Collectors and Patrons’ in Ham House: 400 Years of Collecting and Patronage, p.117. [2] For more on the pearl as a sign of fertility, see A. Rosenthal, ‘Visceral Culture: Blushing and the legibility of whiteness in 18th-century British portraiture’, Art History, vol. 27, no. 4, Sept 2004, p. 569. [3] Portraits of elite female sitters and enslaved African subjects, often children, date to the 16th century, with notable examples produced in Ferrara (Titian’s portrait of Laura dei Dianti of ca. 1523, Collection Heinz Kisters, Kreuzlingen, Switzerland) and Lisbon (Cristóvão de Morais’s portrait of Juana of Austria, daughter of Charles V, of 1555, Musées royaux des Beaux-Arts de Belgique, Brussels). [4] Buckminster Park Archive no. 881. [5] See ‘Interim Report on the Connections between Colonialism and Properties now in the Care of the National Trust, Including Links with Historic Slavery’, https://nt.global.ssl.fastly.net/documents/colionialism-and-historic-slavery-report.pdf, eds. Sally-Anne Huxtable, Corinne Fowler, Christo Kefalas, Emma Slocombe, p. 73.