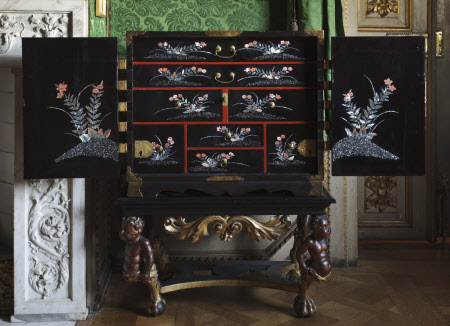 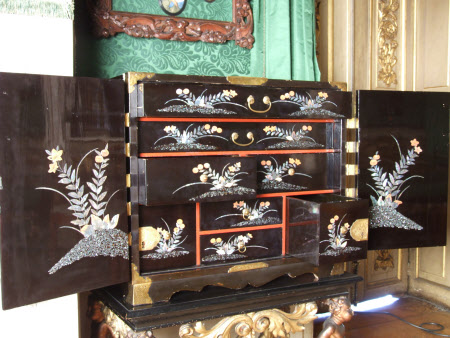 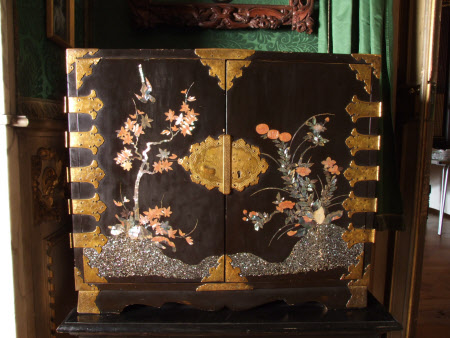 Lacquered wood with gold and red, inlaid with mother of pearl, engraved brass mounts and hinges

Elizabeth Dysart spent a considerable sum extending Ham House, and also on furnishing it. She bought exotic objects from all over the world and was particularly fond of lacquer objects like this cabinet from Japan. Curiosities and small precious objects would have been displayed inside.

A 'Nagasaki lacquer' cabinet [NT 1139897.1], probably either Nagasaki or Kyoto, Japan, circa 1670, on a carved and gilded stand [NT 1139897.2], European, circa 1670. The stand one of a pair; the other [NT 1139896.2] supports another slightly different Japanese cabinet of the same date [NT 1139896.1]. The cabinet lacquered with gold and red on black and inlaid with mother of pearl, mounted with engraved brass hinges, lockplate and corners. The top, the side panels and the doors are decorated with flowering plants and birds, opening to an interior with six drawers and two small doors with escutcheons. The cabinet is raised on a small shaped plinth.

This cabinet, and its similar flanking cabinet [NT 1139896.1], were probably purchased by Elizabeth Murray, 2nd Countess of Dysart (1626 - 1698), circa 1670, and they are believed to have been at Ham House since at least 1677, when an inventory lists 'two Japan Cabinetts' in the Green Closet. The pair of stands were probably commissioned at about the same time, although they do not feature until the 1679 inventory, when they are called ‘frames’. The cabinets on stands have always been placed on either side of the chimney piece, facing the long stools, as can also be seen in H.W. Brewer 's watercolour of the Green Closet circa 1886 (Private collection). A cabinet at Seaton Delaval [NT 1276509.1] appears to be this cabinet’s pair, and is thought to have come from the same workshop. All of these cabinets will be the subject of further research.(Entry adapted by Megan Wheeler, August 2018).

The Ham House inventory of 1677 lists in the Green Closet, 'Two Japan Cabinetts' and the inventory of 1679 'Two Japan Cabinets & frames'. Thence by descent, until acquired in 1948 by HM Government when Sir Lyonel, 4th Bt (1854 – 1952) and Sir Cecil Tollemache, 5th Bt (1886 – 1969) presented Ham House to the National Trust, and entrusted to the care of the Victoria & Albert Museum, until 1990, when returned to the care of the National Trust, and to which ownership was transferred in 2002.