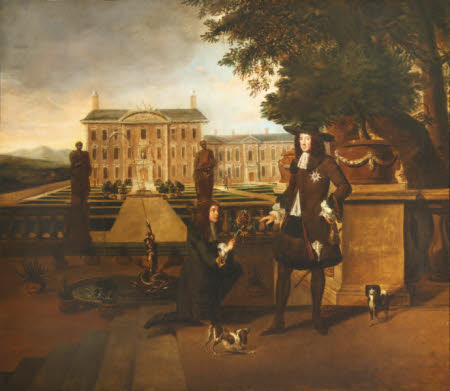 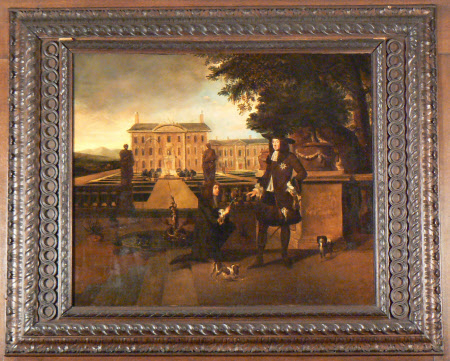 Oil painting on canvas, John Rose (1619–1677), the Royal Gardener, presenting a Pineapple to King Charles II (1630–1685) by Thomas Stewart (1766 – c.1801) (after Henry Danckerts), 1787. A full-length King Charles II standing right, turned slightly to left, facing, wearing the Star of the Garter, standing on a terrace while a gentleman (John Rose), left, presents him on bended knee with a pineapple. In the background is a formal garden and a large house. Two spaniels stand to left and right of the King. Thomas Stewart was born 19 October 1766, and would have been 20 years of age during the first part of October 1787. He entered the RA Schools in 1782, and exhibited portraits and history paintings at the RA between 1791–1801.

Verso: Inscribed in ink on label, examined February 1998 by Maria Flemington, Collections Manager, Ham House: Charles 2nd and Rose his gardiner presenting to him the first Ananas raised in England copied by Thomas Stewart, aged 20 in October 1787, from the original by Dankers in the Collection of Mr Walpole at Strawberry Hill