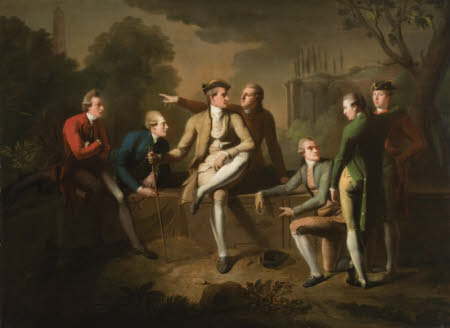 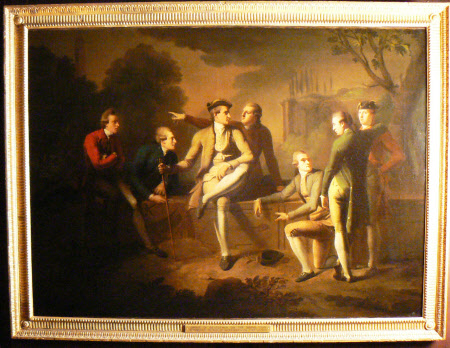 In the 18th century, the Grand Tour was considered to be the best way to complete a gentleman's education. Young aristocrats travelled to the cities of Europe, usually beginning in Paris and then moving south to Spain or Italy where they visited the ancient classical sites. In this group portrait, The Hon. John Tollemache (1750-1777), son of the 4th Earl of Dysart of Ham House poses with his friends. The setting with classical ruins is indicative of their new learning.

By descent through the family of Tollemache earls of Dysart; in 1911 catalogue; and thence by descent until acquired in 1948 by HM Government when Sir Lyonel, 4th Bt (1854 – 1952) and Sir Cecil Tollemache, 5th Bt (1886 – 1969) presented Ham House to the National Trust, and entrusted to the care of the Victoria & Albert Museum, until 1990, when returned to the care of the National Trust, and to which ownership was transferred in 2002

Recto: On frame, in black on gold: GROUP OF GENTLEMEN ON THE GRAND TOUR / ATTRIBUTED TO PHILLIP WICKSTEAD (active 1763–c.1790)

Laing 2009 Alastair Laing, “John Brown as a painter?” Apollo, suppl. Historic Houses and Collections Annual April 2009, pp.12-17, Regrettably, the known portraits of Lord Rous show him as too much older to be usefully compared with the likeness of the man seated in the group on the right of the picture”; and, n.32: “The earlier portrait of Rous, probably done around the time of that of Beechey’s of his second wife (i.e. c.1796), is known only from Henry Bone’s squared-up outline drawing of it for his lost enamel miniature (cf. Richard Walker, ‘Henry Bone’s pencil drawings in the National Portrait Gallery’, The Sixty-First Volume of the Walpole Society, 1999, no. 439, p.342 & fig. 148). Sir William Beechey’s later portrait of him, three-quarter length, in peer’s robes, was painted in 1811, and scraped in mezzotint by Charles Turner in the same year Ford 1974 Brinsley Ford, ‘James Byres, Principal Antiquarian for the English Visitors to Rome’. Apollo XCIX, June 1974, pp.446–61