The Five Eldest Children of King Charles I 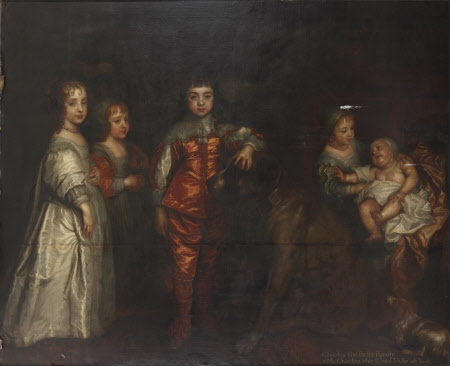 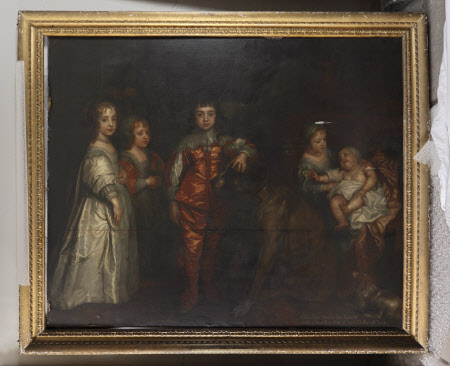 This is a copy of the original in the Royal Collection, signed and dated 1637. It is a charming and very popular image of the royal children. There are many copies of this composition and of the earlier, smaller one with only three children, which can be found throughout many country house collections. Its appeal extended beyond supporters of the Stuarts.

Oil painting on canvas, The Five Eldest Children of King Charles I, after Sir Anthony Van Dyck (Antwerp 1599 - London 1641). Full-length portraits, all standing, Left to right, Princess Mary Henrietta (1631-1660) turned to right, head facing, Prince James (James II) (1633-1701) in dress and cap, turned three-quarters to right, Prince Charles (Charles II) (1630-1685) facing, his right foot slightly forward, his right hand to his side his left on the head of a Lyme mastiff who is sitting on his haunches and turned to left, Princess Elizabeth (1635-1650) who supports with both her hand, Princess Henrietta Anne (Duchess of Orléans) (1644-1670) who is seated on a draped and tasselled chair and stretches her right hand towards her brother Charles; a small King Charles spaniel is seated on the ground looking up at Princess Elizabeth. Architectural background to left with drape, centre is a landscape view with trees and the right is occupied by a high table with and urn, vine-leaves in a dish and a fruit.

In Swift 1811 inventory; thence by descent until, following the death of Edward William Spencer Cavendish, 10th Duke of Devonshire (1895 - 1950), Hardwick Hall and its contents were accepted by HM Treasury in part payment of death duties and transferred to the National Trust, in 1959