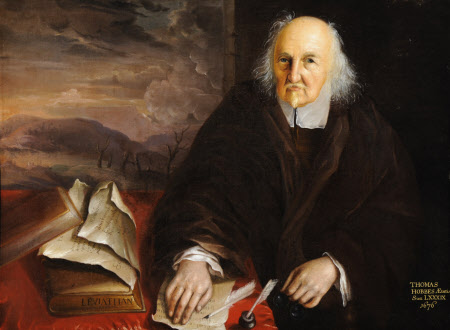 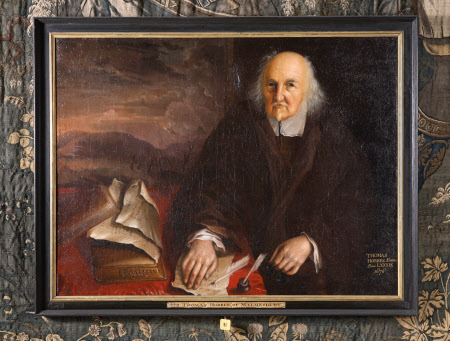 Thomas Hobbes, was a mathematical and political and social philosopher; who was recommended as a tutor to William Cavendish, subsequently the 2nd Earl of Devonshire with whom he did the Grand Tour in 1610 and learned French and Italian. He was also tutor to the 3rd Earl of Devonshire and lived comfortably at Hardwick Hall and more frequently in the Duke of Devonshire's house on the Strand in London. His most important work was the Leviathan (1651), which contains a nominalist, materialist, anticlerical outlook on nature and society and raised a storm of protest that was never to abate throughout his life. He also made a misguided claim to have succeeded in squaring the circle and in duplicating the cube and was therefore not elected a Fellow of the Royal Society. He died of a stroke at Hardwick on 4 December 1679.

Oil painting on canvas, Thomas Hobbes (1588–1679), aged 89, British (English) School, inscribed bottom right: THOMAS / HOBBES Ætatis/ Suæ LXXXIX / 1676. A half-length portrait of an elderly man, turned slightly to left, facing, spectacles in his left hand, seated behind a table on which are writing materials, a sheet of paper indistinctly inscribed with date, and a copy of the Leviathan; landscape background left through window.