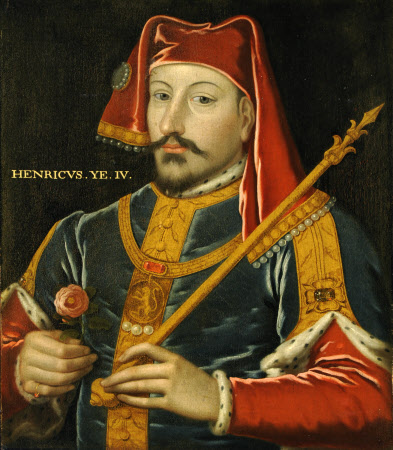 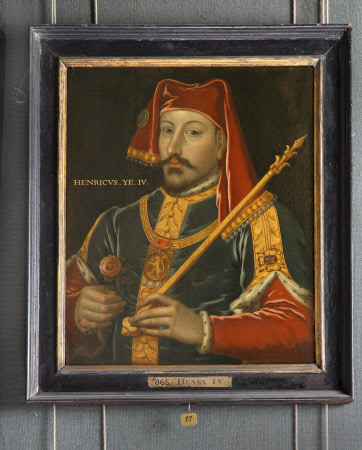 Oil on panel (red-ruddled back)

Henry IV was the son of John of Gaunt (1340-1399) and Blanche of Lancaster (1345-1369), daughter of Henry Grosmont, Duke of Lancaster. He was referred to as Henry Bolingbroke, a name taken from his birthplace at Bolingbroke Castle, in Lincolnshire. He was made a Knight of the Garter on 23 April 1377, and between 1384 and 1399 came into possession of several Dukedoms and Earldoms, until he usurped the throne of England upon the abdication of Richard II on 30 September 1399. He was crowned on 13th October 1399 at Westminster Abbey. Married twice, his first wife Mary de Bohun (1369-1394) bore him seven children, although his second wife, Joan of Navarre (1370-1437), bore him none. Henry IV died of a disease resembling leprosy and was buried in Canterbury Cathedral. This portrait is a similar composition to many others, probably from an original master copy.

Oil painting on panel (stained-red oak - ruddling - or mahogany), King Henry IV (1367–1413), British (English) School, 16th/17th century. A half-length portrait, turned slightly to the left, gazing at spectator, wearing a green robe embroidered with gold bands, red headdress, holding a rose in his right hand and a sceptre in his left. King Henry IV of Lancaster, surnamed Bolingbroke was the son of John of Gaunt, Duke of Lancaster, third son of Edward III. He deposed Richard II, and by usurping the throne gave rise to the Civil War between the Houses of York and Lancaster.There is no portrait of Henry IV painted from life and the only valid likeness is his tomb effigy so it was not until the close of the 16th century that what became generally accepted as the standard portrait of Henry IV was evolved.