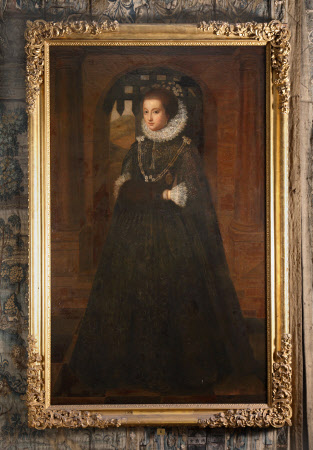 The sitter was the daughter of William Cecil, 2nd Earl of Exeter (d.1640) and Elizabeth Drury (1579-1654), his second wife. This picture was formerly attributed to Honthorst, as a portrait of Elizabeth of Bohemia. It has been proposed that that Diana Cecil was painted when her first husband, Henry de Vere, 18th and last Earl of Oxford (1593-1625) was imprisoned in the Tower between 1622 and 1623, to which the portcullis is an allusion. However, they did not marry until January 1624. The landscape seen through the portcullis is probably a symbol of her own feudal seat, not the Tower of London. In 1629, the Countess married Thomas Bruce, 2nd Lord Bruce of Kinloss and 1st Earl of Elgin (1599-1663), whose portrait is also at Hardwick. He succeeded his elder brother in the Scottish barony in 1613 on the death of his father in a famous duel at Bergen-op-Zoom with Edward Sackville, 4th Earl of Dorset (1590-1652).

Oil painting on canvas, Lady Diana Cecil, Countess of Elgin (1596 - 1654), British (English) School, 1624-1625. A full-length portrait, turned slightly to the left, standing with her hands in a muff, wearing a dark embroidered dress and white lace collar and cuffs; a portcullis gateway in the background.