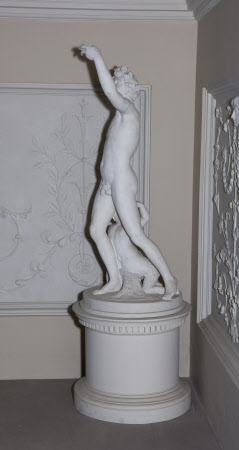 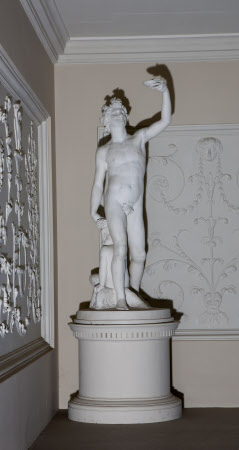 Painted plaster, Bacchus, after Jacopo Sansovino (1486-1570), Italian (Florentine) School, c.1757. A plaster cast of Jacopo Sansovino's marble statue of Bacchus (commissioned 1510) in the Museo Nazionale del Bargello, Florence. Bacchus, nude, with vines in his hair, raises a drinking cup with his proper left hand and clutches a bunch of grapes with his proper right. A child faun crouches behind his proper right leg, and playfully holds a bunch of grapes to his head.

Bacchus is one of a set of Florentine casts acquired by Nathaniel Curzon (1726-1804) from the sculptor Joseph Wilton (1722-1803). A surviving bill from Wilton shows that in August 1757 Curzon was billed for 'a cast in Plaister' of 'Bacchus of Sansovino' at the cost of £10.10s.0d (MS, Kedleston Archive). The cast of Bacchus was part of a consignment of eight casts from Florence which included the Idolino (NT 109005), 'Venus washing [her feet] (NT 109014), the Dancing Faun (NT 109003 or 109009) and the Venus de' Medici (NT 109004 or 109010) and three others which have been discarded or lost. Unlike Matthew Brettingham, who acquired the actual moulds for some of the Roman statuary he cast for Kedleston, Wilton probably had the casts made through an agency in Florence. Wilton and Brettingham had lived together in Rome, training and making casts for the Grand Tour market, before Wilton then settled in Florence in 1751, returning to London four years later in 1755. The statue is listed in the 1758, 1769 and 1861 'Catalogue[s] of the pictures, statues, &c. at Kedleston' as being displayed on the Great Staircase. Alice Rylance-Watson March 2019