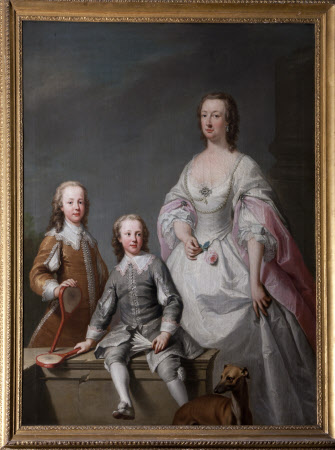 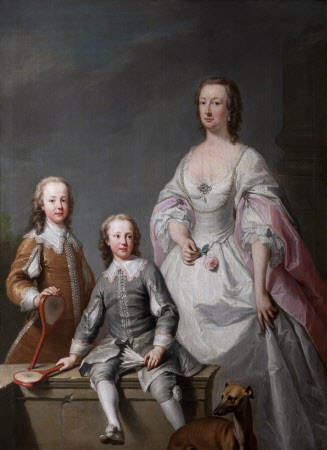 Oil painting on canvas, Mary Assheton, Lady Curzon (1695-1776) with her Two Sons Nathaniel Curzon, 1st Baron Scarsdale (1726-1804) and Assheton Curzon, 1st Viscount Curzon (1729-1820) by Andrea Soldi (Florence c.1703 - London 1771). Three-quarter length portrait of Lady Curzon, standing on the right, wearing a white satin dress with pink fold back sleeves, and holding a rose in her right hand. She is with her sons Nathaniel and Assheton who hold a battledor and shuttlecock, there is a dog in the foreground. Soldi began his career by painting British Turkey merchants in the Levant, and it was at their recommendation that he came to England to make his fortune in 1736. By the mid 1740's he was so successful that it turned his head and he was 'willing to be thought a Count or Marquis, rather than an excellent painter; by the end of his life he was reduced to begging the Royal Academy for charity. This picture must have been painted around 1738 40; a palpably superior version, identical save that the sitters are not wearing 'Vandyck' dress, is at Parham Park in Sussex (the former house of the Barons Zouche, descendants of Assheton Curzon, later 1st Viscount Curzon).