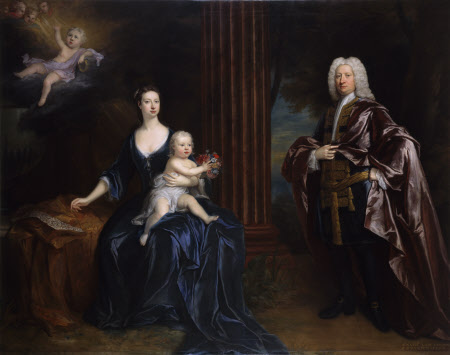 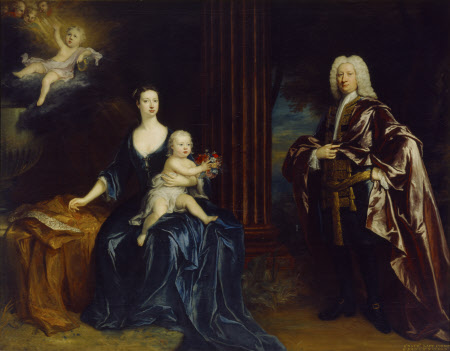 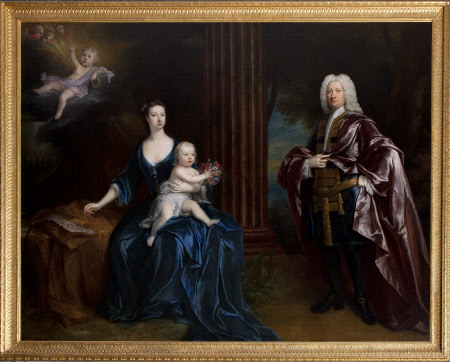 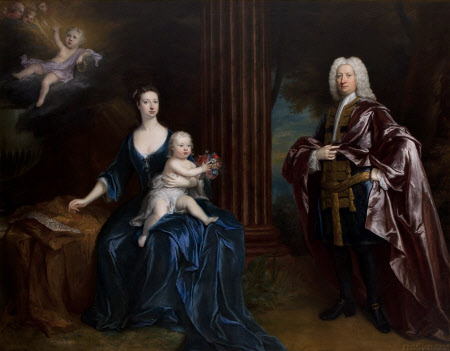 Oil painting on canvas, Sir Nathaniel Curzon, 4th Baronet Curzon (1676-1758) with his wife, Mary Assheton, Lady Curzon (1695-1776) and their son Nathaniel, later Nathaniel Curzon, 1st Baron Scarsdale (1726-1804) with their Dead Son John Curzon (1719-1720) in the Clouds above by Jonathan Richardson the elder (London 1665 – London 1745), 1727 - 30. Full-length portraits, Sir Nathaniel in green coat trimmed with gold braid and plum cloak, standing on the right, gazing at the spectator, Lady Curzon seated in low-cut blue dress on the left, holding their surviving son, Nathaniel on her lap, who holds a bouquet of flowers whi he holds out to his father, with the apotheosis of their deceased son John in the clouds above. This family group shows Sir Nathaniel Curzon, 4th Bt. (1676 1758), together with his wife Mary Assheton (1776), holding their second son Nathaniel, later lst Baron Scarsdale, in her arms, whilst their deceased eldest child, John, is portrayed in the clouds. The picture must have been painted between 1727, when Nathaniel was born, and 1730, the year of his brother Assheton's birth, and was clearly designed to celebrate the revived hopes in a healthy male heir

Recorded in State Bedchamber in 1768; and thence by descent until bought with part of the contents of Kedleston with the aid of the National Heritage Memorial Fund in 1987 when the house and park were given to the National Trust by Francis Curzon, 3rd Viscount Scarsdale (1924-2000)