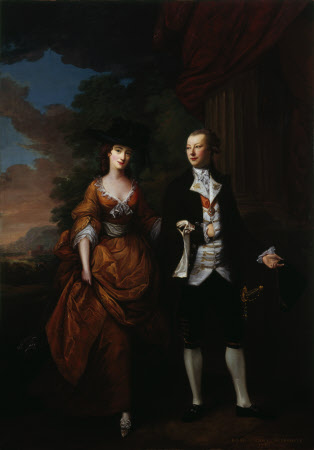 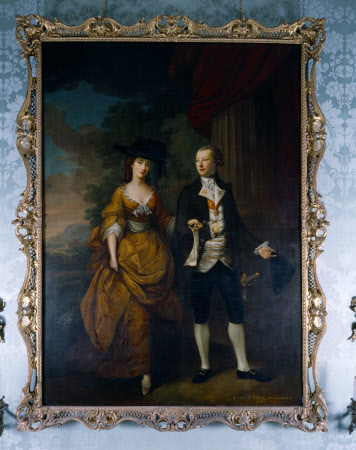 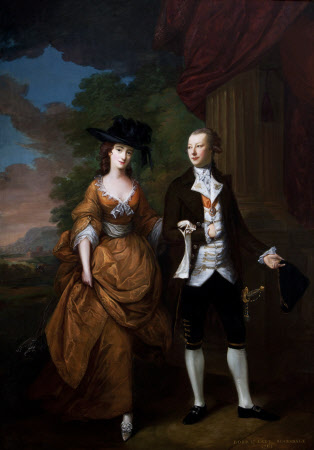 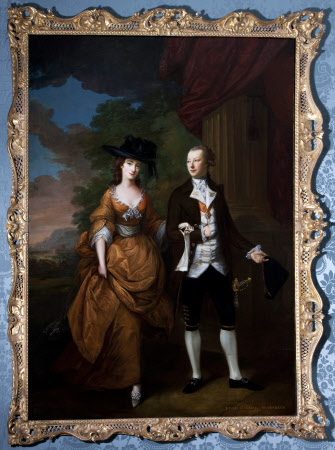 Sir Nathaniel Curzon, 5th Baronet (1726-1804), raised to the peerage as Baron Scarsdale in 1761, was the creator of the house and park at Kedleston as we known them today. A keen amateur architect following the lead of his older friend and mentor Lord Leicester (the builder of Holkham), his purpose may well have been to create a Tory ‘power house’ in the country, which would rival the Whig citadel of Chatsworth. Curzon’s marriage, to a daughter of the 2nd Earl of Portmore, had taken place in 1750, and ‘Athenian’ Stuart’s preliminary design for a dining room at Kedleston, made about 1758, already shows a full-length portrait of the couple strolling in the park, hung in the alcove recess above the sideboard. However, it was to be another three years before this project was realised, by the Irish-born artist Nathaniel Hone, and the picture was then placed above the chimneypiece in the state dressing room. Here it served as a culmination to the series of portraits hung throughout the three rooms of the state apartment, linking the Curzons with the Stuart kings. Despite its Neo-classical setting, in one of Adam’s most ingeniously contrived spaces, the picture has a pierced gilt frame which is thoroughly Rococo in style. The informal pose of the young couple, recalling the pastoral scenes of Rococo painters like Hayman, also looks forward to later and more celebrated pictures such as Gainsborough’s Morning Walk (Mrs and Mrs William Hallett) in the National Gallery of around 1785, or Romney’s Sir Christopher and Lady Sykes at Sledmere, of around 1790. The arch-enemy of Sir Joshua Reynolds, whose reputation later eclipsed his, Hone was nevertheless one of the most fashionable and sought-after portrait painters of his day. This work, which has claims to be his masterpiece, shows that he could be both innovative in composition and brilliant in technique. Thanks to the saving of Kedleston Hall by the NHMF, the picture will now remain in the setting for which it was specially painted, its sylvan landscape background reflecting the views of the park seen through the sash windows on the opposite wall.

Oil painting on canvas, Nathaniel Curzon, 1st Baron Scarsdale (1726-1804) and his Wife, Lady Caroline Colyear, Lady Scarsdale (1733-1812), walking in the grounds at Kedleston by Nathaniel Hone the elder, RA (Dublin 1718 – London 1784), inscribed in gilt paint, bottom right : LORD & LADY SCARSDALE / 1761. Two full-length portraits, Lady Scarsdale on left with her arm (holding a long glove) through her husband's right arm. His right hand is tucked into centre of waistcoat. She looks forward, he looks at her. He in dark coat and breeches with white vest and hose, wearing the neck band and ribbon of the Scottish Baronetcy of 1636. She in brown with a black hat. Behind Lord Scarsdale is a marble pillar with a reddish drape across top. A distant view of Kedleston can be seen to centre left. The charming informality of this portrait antedates that of Thomas Gainsborough's Morning Walk (Mr and Mrs Hallett, National Gallery) by about a quarter of a century. Intriguingly, the idea may have come from James 'Athenian' Stuart, since a much sprightlier version of the idea is shown by him over the buffet in one of his watercolour designs for the State Room.