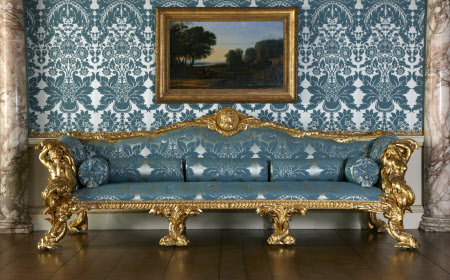 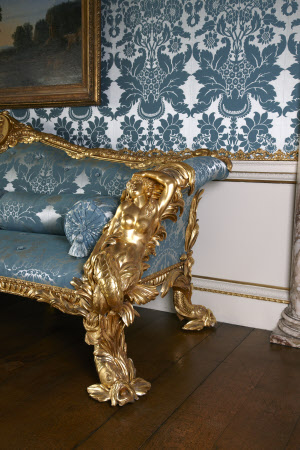 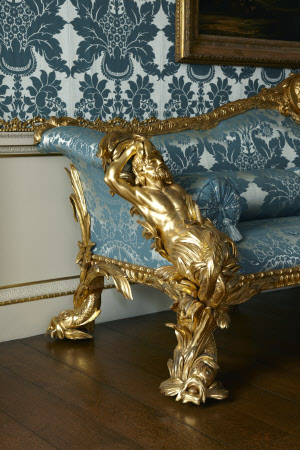 One of a magnificent pair of giltwood sofas, by John Linnell, London (1729-1796) cabinet maker, upholsterer and carver. Commissioned by Nathaniel Curzon, 1st Baron Scarsdale (1726-1804), supplied, together with a second pair of sofas to Kedleston in 1765.The framework carved at the back with rosettes and ribands entwined with festoons of foliage and with medallion reliefs of classical heads applied to the centres, the lower border gardooned. Legs carved as figures of tritons, sea-nymphs and with aquatic foliage and stylized dolphins. Seats, backs, arms and five loose bolsters covered with flowered blue silk brocade. Gilding restored and sofas re-covered and cushions re-tassled by Peter Thuring in 2000-2003 as part of the overall restoration of the Drawing Room. Each sofa is furnished with five bolsters.

John Linnell was employed at Kedleston and worked side by side with the architect Robert Adam (1728–1792). Ledgers recording expenditure on the building and on the furnishings of the house show that regular payments were made to the Linnell firm between 1759 and 1796 totalling nearly £3,000. No details are given of the furniture supplied. However, John Linnell's designs for the two pairs of sofas for the state drawing-room survive in the V & A Museum. [Print Dept. E 131, 138, 140, 1929] while the executed pieces remain in situ at Kedleston. Nathanial Curzon had been considering the decoration of the drawing room for several years and it was discussed with Michael Henry Spang (d.1762)., who advised Curzon on the purchase of pictures and who also carved several of the chimney pieces, that a scene symbolic of victory in battle in which a conquering Britannia and her supporters are depicted within a border of seahorses and merfolk blowing conches. The design was clearly composed to satisfy his patron’s interest in naval exploits and in the sea which also expressed itself in the purchase of ship models for display in the new house. But Spang’s proposal was rejected in 1759 in favour of a design by Robert Adam for a plaster ceiling. This was in the antique taste but nevertheless, included merfolk and seahorses thus retaining something of the nautical flavour of Spank’s rejected design. The plans were agreed for the room and were underway by 1760. Later the following year it was time to consider the furniture, monumentality was essential in view of the scale of the Venetian window and the door cases. The choice of two very large pairs of sofas rather than a suite of armchairs and sofas was accordingly made. Of the large pair, one was to stand on either side of the fireplace, each sofa measuring 13 feet in length. In their design Linnell maintains a nautical theme and his preliminary sketches show various poses for the freestanding merfolk at either end. The second, slightly shorter pair, of 12 feet in length were then designed to stand against the east wall and one against the west wall of the room, each end composed of a reclining Triton and sea nymph. Both pairs are supported at the centre by entwined dolphins. It was Linnell’s original intention to complete the decoration of the largest sofas with a circular medallion on the back carved with the Scarsdale arms. The design of these medallions was changed however during the planning stage to the adoption of classical scenes and eventually to profile heads derived from classical sources. In the preparation of these designs Linnell had been aided by his previous experience in planning George III’s Coronation Coach. He doubtless also had the benefit of discussions with Adam, under whose direction he was working and, above all, he was concerned with the interpretation of his patrons wishes, which are likely to have been clearly explain to him. The sofas took about three years to make and the first arrived in Kedleston in July 1765. Samuel Wyatt at once reported to Lord Scarsdale ‘the sofa arrived safe and it is certainly as elegant a piece of furniture as ever was made and as all well executed. The gilding is by far the best done of any I ever saw, it’s suits the place in point of size very well‘. Another and, probably all four, had arrived by August of that Year. They did not, however, survive the journey without damage for a local man was paid in August 1765 for ‘glueing bits on sofas’ How much Linnell charged for these elaborate and unique creations can only be guessed from entries in the ledger. These show payments to the firm of £200 in 1765 and £600 in 1766. For further extensive discussion and research of the Linnell firm and Kedleston Hall see: Hayward & Kirkman ‘William & John Linnell, 18th century London Furniture Makers’ Studio Vista 1980. James Weedon (May 2018)