The Panelling to the so-called Inlaid Chamber 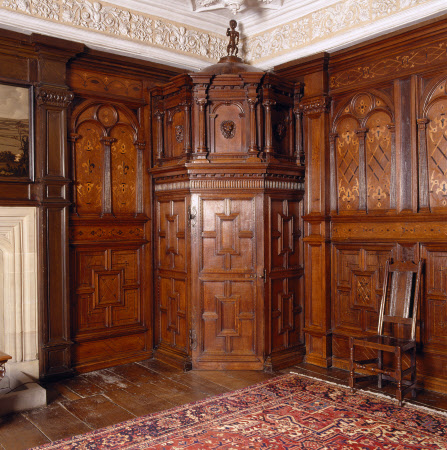 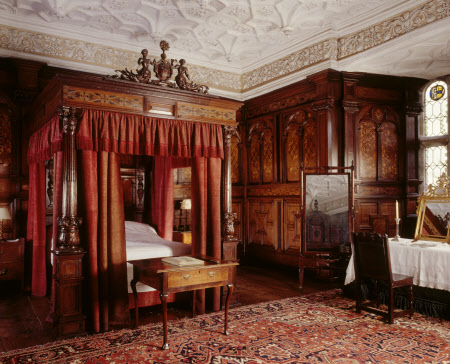 The wall panels to the Inlaid Chamber, circa 1575 - circa 1585, commissioned by Thomas Boynton (d. 1581) and his wife Alice (d. 1588), the widow of Walter Strickland (1516 - 1569). Made of oak, inlaid with poplar, bog oak, and embellished in areas with a dark stain. To all four walls, divided into bays by Ionic pilasters with applied edge mouldings so that they appear panelled, or 'coffered'. The walls topped by a frieze inlaid with arabesque strapwork of different designs, above an upper register of pairs of round-headed arches within a third arch supported on fluted Ionic pilasters. Some inlaid with interlaced lozenges, others by fleur-de-lis or a crescent. A further arabesque strapwork-inlaid frieze below. The surbase applied with mitred mouldings forming groups of five panels; the central panel 'overlaying' the four outer panels, which all have one inset corner. A skirting frieze carved with geometric strapwork below. This panelling marks a departure from the rest of the woodwork at Sizergh Castle, commissioned by Water Strickland before his death in 1569. Surviving overmantels from his lifetime dated between 1558 and 1569 are florid, carved expressions of Italian designs transmitted through Flemish prints. Wells-Cole has pointed out that several of the cartouches to these overmantels were taken from designs by Battini, published in Vigilate in Antwerp in 1553, and that their distinctive highly-accomplished carving may well be attributable to a school of carvers from Newcastle. In contrast, the panelling to the Inlaid Chamber employs decorative techniques then fashionable in Germany, particularly its broad, lavish and striking inlay which is to be found nowhere else at Sizergh. The porch that clads the doorway – an extremely rare feature outside of the southern counties – is Flemish in inspiration, and similar to four interior porches drawn in Differents Pourtraicts de menuiserie by de Vries, published sometime in the 1570s or 1580s in Antwerp. The panelling to the Inlaid Chamber was clearly made by craftsmen who had not worked at Sizergh before. The room’s closest counterpart is at Gilling Castle in Yorkshire, where panelling incorporates a skirting frieze which shares the same slender lines of geometric inlay. Thomas Boynton was from Yorkshire, indeed he was a relation by marriage of the Fairfaxes of Gilling, and it is thus probable that he employed craftsmen from his native county, rather than re-employ the carvers who had worked at Sizergh in the 1560s. In fact, it was probably Thomas Boynton’s career which was the impetus behind the Inlaid Chamber’s transformation into a new best bedchamber. Elected MP in 1571, High Sheriff of Yorkshire in 1576, he was knighted at Hampton Court in 1577. The same year he was given a position on the Council of the North, thus working with men who essentially governed the north of England. By his will of 1581, Boynton requested that the Earl of Huntingdon, President of the Council of the North at the time, assume guardianship of his son, and so it is clear that he held the Earl in some regard. It is possible that a prospective visit from Huntingdon – the Queen’s representative in the north – prompted Thomas Boynton and his wife to create the Inlaid Chamber, to ensure the comfort of such an elite guest, and to reflect the family’s increased status and wealth. Abraham Storey, 'house carpenter', recorded as having repaired 'old wainscote in ye inlay'd chamber' in 1772. It is possible that this followed a fire to the South, or fireplace, wall. There was certainly a major alteration to that wall at some point in the late 18th/early 19th century. The pilasters to that wall are pine, rather than oak, and there is surprisingly no overmantel above the fireplace, which is adorned with a painting instead. This painting was installed in 1805, so the alterations must have taken place before then.

Probably commissioned c. 1575 by Thomas Boynton (d. 1581) and Alice Boynton (d. 1588), the widow of Walter Strickland (1516 - 1569), as an addition to the rebuilding and refurbishment undertaken at Sizergh in the 1550s and 1560s. Thomas and Alice married in 1573. Sold in 1891 by Walter Charles Strickland (1825 - 1903) for £1000 to the then South Kensington Museum (now the Victoria & Albert Museum). The bed and the armorial stained glass roundels which adorn the windows in the Inlaid Chamber were sold to the same buyer in 1896 for a further £400. Two sections of paneling were returned on loan to Sizergh Castle in 1973, and the remainder returned to Sizergh on long-term loan in 1999. Transferred to National Trust ownership in 2016.