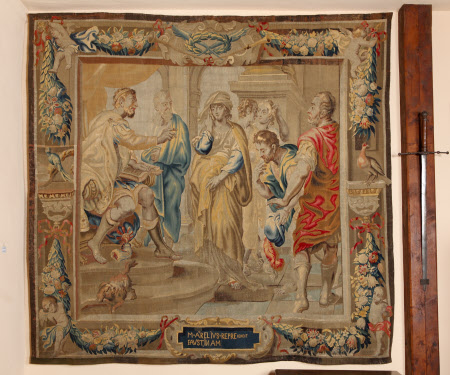 Tapestry, wool and silk, 7 warps per cm, Marcus Aurelius Berating Faustinia, Michiel Wauters, Antwerp, after a design by Abraham van Diepenbeeck, c. 1660-1679. Marcus Auurelius sits on a throne to the left, raising one arm as he speaks to his wife Faustina, who stands before him raising one hand to her cheek and looking downwards. The pair are surrounded by courtiers and attendants, and a small dog runs down the steps of the emperor’s throne. The tapestry has borders decorated with swags of fruit and leaves with putti at each corner, a laurel wreath and crossed palm branches at the centre of the upper border, and a cartouche in the lower border with the inscription ‘M•AURELIVS•REPREHENDIT / FAVSTINAM’.

Marcus Aurelius (born Marcus Annius Catilius Severus in 121 AD) was Roman Emperor from 161 to 180 AD. He was known as the ‘Philosopher King’ and is best remembered for the ‘Meditations’, a series of auto-biographical meditations on the duties of a ruler. His life appears in a number of late Roman histories but was codified in the sixteenth century by the Franciscan historian Francisco Antonia de Guevara, whose ‘Libro Aureo de Marco Aurelio Emperador’ was published in 1529, dedicated to the Holy Roman Emperor Charles V. An expanded edition appeared in Barcelona in 1647 (De Mendonça 1939) and it was almost certainly this edition that provided the source for the present tapestry set. The ‘Libro Aureo’ (or ‘Golden Book’) told the story of the Philosopher King as a series of short narratives, each of which had a moral. In Chapter XXXVII Marcus Aurelius addresses his wife on the subject of marriage and children, and this is probably the basis of the present tapestry. ‘Marcus Aurelius Berating Faustinia’ comes from a series telling the story of Marcus Aurelius. The series was woven in the Antwerp workshop of Michiel Wauters (d. 1679), whose monogram appears on a number of other surviving examples. The records of the Firm Forchoudt, art dealers who exported tapestries from the Netherlands throughout Europe in the late seventeenth century, contain references to Marcus Aurelius tapestries woven by Michiel Wauters in the 1670s (Denucé 1936, pp. 373, 374, 377), and two tapestries from the set along with a set of eight cartoons appeared in Wauters’s posthumous warehouse inventory in 1679 (Denucé 1932, p. 300). An undated letter from Michiel Wauters to the art dealer Guillaum Forchoudt confirms that the ‘Marcus Aurelius’ tapestries were designed by the Antwerp painter and printmaker Abraham van Diepenbeeck (1596-1675) (Denucé 1931, p. 272). Diepenbeeck began supplying tapestry designs for the Wauters brothers in 1655, and in the following twenty years he designed at least 11 different tapestry sets for them. Diepenbeeck appears to have provided his designs in the form of drawings in ink which were then translated into cartoons by specialist cartoon painters. Three of Diepenbeeck’s drawings for the ‘Marcus Aurelius’ tapestries survive in the British Museum, the Graphische Sammlung Albertina, Vienna and the Städelsches Kunstinstitut, Frankfurt (Steadman 1974, pp. 47-48). Reversed copies of three drawings, possibly made by a cartoon painter, are in the Whitworth Art Gallery. The ‘History of Marcus Aurelius’ was among the most popular of the Wauters tapestry sets, and numerous examples survive. The most complete are a set of five in the Museum of Applied Arts, Milan (Forti-Grazzini 1984, cats. 13-16, pp. 32-37, and figs. 44-56) and a set of six in the Museu Nacional de Arte Antiga, Lisbon (De Mendonça 1939). A number of tapestries from the set have been recorded in collections in Britain (Forti-Grazzini 1984, p. 33). The Wauters brothers supplied large numbers of tapestries to the English market – so many in fact that their tapestries were once thought to be English. There are more than 20 Wauters tapestries in National Trust collections alone, including two tapestries of ‘The Triumph of Marcus Aurelius’ and ‘The Coronation of Marcus Aurelius’ at Packwood House (nos. 557891, 557892). (Helen Wyld, 2012)