workshop of John Broadwood and Sons 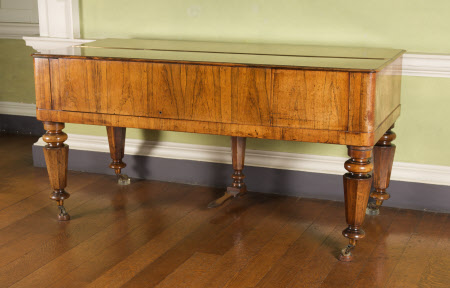 Purchased with the family collection of Abbey contents in situ from Mrs Petronella Burnett-Brown December 2009 Information from Dr Alastair Laurence of John Broadwood and Sons Ltd, summarised: Square piano no. 62,734 was finished 11th April 1856. It left on the 19th April and was purchased by a Mr Russell of Oxford who appears to have been Broadwood’s agent. He paid a wholesale price of £49 – the full retail price is listed as 65 guineas. It was dispatched, via the GWR from Paddington, in a wooden case labelled ‘Charles Barrett Esq, Wallingford, Berks’ so the presumption is that Barrett was Russell’s customer. It is described as a number 8 square pianoforte French Rosewood c to a. (‘French’ is thought to refer to the style of casework with the raised panels at the front corners.) The Lacock instrument is identical to the so-called ‘Albert’ square, no. 63,459 of 1858, in Richard Burnett’s collection at Finchcocks, Goudhurst, Kent, which was hired to Queen Victoria from 1866 until her death in 1901.

workshop of John Broadwood and Sons , made by