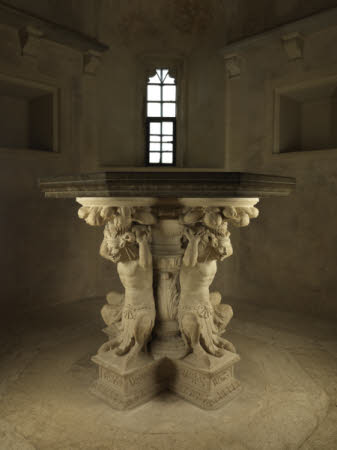 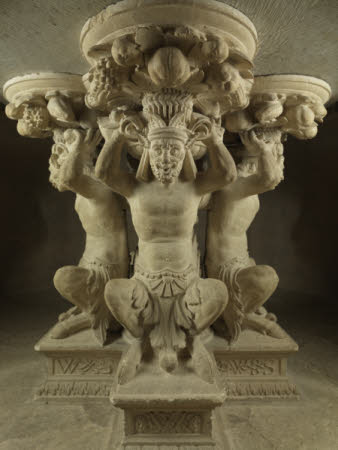 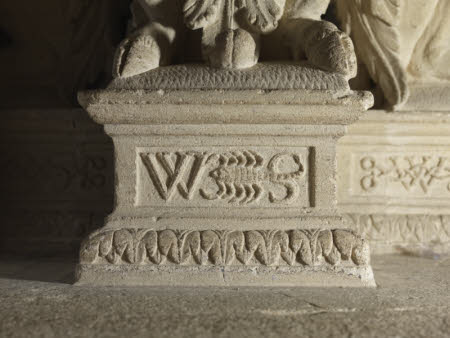 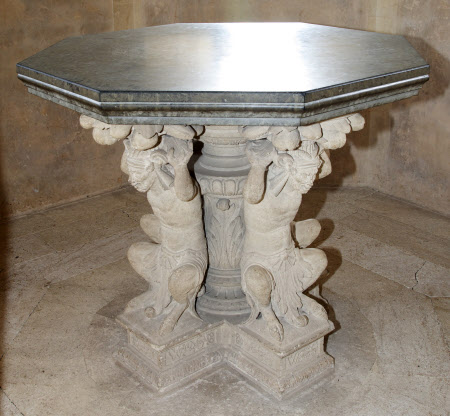 Installed at Lacock Abbey between 1542 and 1553, this unusual octagonal stone table was commissioned by Sir William Sharington (c.1495– 1553) for a small room within an octagonal stone tower, probably designed to safeguard his treasured collections and curiosities. Sharington purchased Lacock Abbey – formerly a nunnery – in 1539 following Henry VIII’s order for the dissolution of religious houses. He remodelled the building extensively, and this table includes his carved monogrammed initials along with those of his wife Grace Paget, née Farrington (fl.c.1520–56), whom he married in 1542. The design of the table is extraordinary. It is supported by four crouching satyrs (creatures with men’s bodies and goats’ legs) holding baskets of fruit upon their heads. It is possible that Sharington supplied printed designs to guide the stonemason, and the creatures bear some similarity to crouching satyrs in the work of the French designer Jacques Androuet du Cerceau (c.1520–86). Like the sea dog table at Hardwick Hall, Derbyshire, it provides a glimpse of the inventive style of fashionable Tudor interiors, which were influenced by Italian and French Renaissance ornamental designs.

A Purbeck marble and oolitic limestone centre table, commissioned by William Sharington (c. 1495-1553) and traditionally attributed to John Chapman (fl. 1550), English, circa 1542-53. The octagonal marble top with moulded edge supported on a gadrooned and acanthus-carved baluster with fluted and stop-fluted collars, and encircled by four crouching, leering satyrs balancing baskets of fruit and the top upon their heads. The base a cruciform plinth, carved with the initials ‘WGS’ (for William and Grace Sharington) and scorpions, Sharington’s personal badge.

Sir William Sharington (c.1495-1553) purchased Lacock, a nunnery suppressed during the Dissolution of the Monasteries, in 1539, and re-modelled it extensively. The octagonal stone tower, or belvedere, which houses this table (and a companion, NT 996423) is the only substantial remnant of this advanced Renaissance building, borne out of the enlightened architectural programme pursued by England’s leading Reformers in the 1540s and early 1550s. This table is the centrepiece of the tower’s middle storey, or ‘Strong Room’, a room to display treasured objects and in which to study. Cruciform in plan, its plinth bears Sharington’s scorpion badge and his initials with those of his third wife, Grace, whom he married in 1542, thus providing a terminus ante quem for the table. The base rises through a group of four crouching, muscular satyrs, supporting baskets of fruit and the table’s octagonal top upon their heads. It has few parallels in England – of the hundreds of tables recorded in the inventory of Henry VIII’s possessions taken after his death in 1547, only one of them was made of stone – and scholarship has not yet settled the question of the artistic influences behind it. Italian in form, its details were transmitted via the prism of France. The closest extant printed source, which shows crouching satyrs atop a triumphal arch, was published by the French designer, Jacques Androuet du Cerceau (c.1520-86), in 1549. The table is traditionally attributed to the stone carver John Chapman (fl. c.1550), who may also have carved a fireplace, and heraldic gable finials, at Lacock. Chapman – partly through Sharington’s agency – worked for the leading figures of the Protestant regimes of Henry VIII and Edward VI, including Thomas Seymour, 1st Baron Seymour of Sudeley (c.1508-49), John Dudley, Duke of Northumberland (1504-53) and, famously, Sir John Thynne (c.1515-80) at Longleat. The result is said to have constituted a ‘momentary High Renaissance’ in England, ‘a mid-century classical interlude’ never to be repeated. In 1549, Sharington was found guilty of counterfeiting and debasing the coinage to finance a rebellion masterminded by Thomas Seymour, 1st Baron Seymour of Sudeley (c. 1508-1549), who was beheaded. This stain on Sharington’s reputation was only redeemed – for subsequent biographers – by the sophistication and style of his house at Lacock.

ommissioned by William Sharington (c.1495-1553) thence by descent. Purchased by the National Trust with the family collection of Lacock Abbey contents in situ from Mrs. Petronella Burnett-Brown in December 2009.