Sir Thomas More and his Family 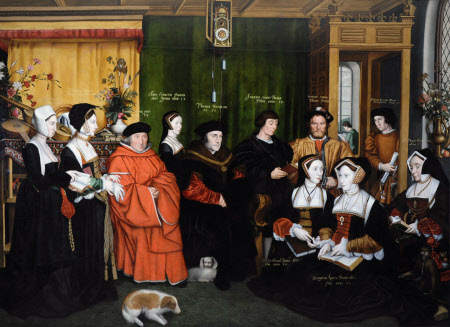 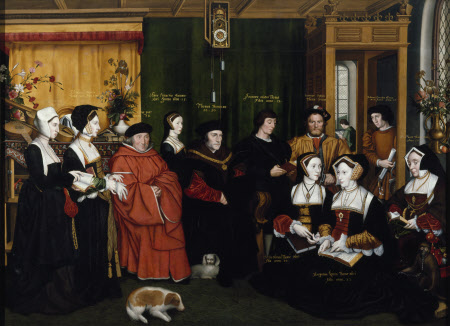 This extraordinary group portrait depicts three generations of the family of Sir Thomas More (1478–1535), Lord Chancellor to Henry VIII, who was executed for treason for not supporting the annulment of the king’s first marriage. It is a copy or version of a painting from 1527 by Hans Holbein the Younger (1497/8–1543), the most important artist working in England during the 16th century. This copy is traditionally associated with the little-known English artist Rowland Lockey (c.1565–1616) and might have been painted for More’s grandson, Thomas, or a member of his daughter Margaret Roper’s family, as a way of remembering their history and healing the wounds of More’s death and disgrace. A descendant of Margaret married into the Winn family, who lived at Nostell in Yorkshire, and the picture came to the house in 1742 and has remained there ever since. Holbein’s original portrait of the family was lost in a fire in 1752, making this copy of even greater importance to the study of his work.

This spectacular group portrait shows Sir Thomas More (1478-1535), Henry VIII’s Lord Chancellor, surrounded by several generations of his family. It is a copy of a lost original by Hans Holbein the younger, who produced over a hundred full-length and miniature portraits of members of the Henrician court. The original, one of Holbein’s first English commissions, was destroyed by a fire at the Bishop of Olmütz’s Palace (Olomouc, Czech Republic) in 1752. The Nostell canvas is one of five versions extant today. It has a later inscription attributing it to the English artist Rowland Lockey (active 1593-1616), the author of the version in the National Portrait Gallery.Holbein’s composition may be the earliest example of a domestic group portrait produced in England. Fortunately, an annotated compositional sketch for the original painting survives (Kunstmuseum Basel, inv. 1662.31), as do several drawings of the individual sitters (Royal Collection Trust) and related half-length portraits, including that of Sir Thomas More (Frick Collection, New York). The large scale suggests that More may have commissioned it for the Long Gallery of his new ‘Great House’ in Chelsea. The gathering of the family conveys a strong sense of dynastic unity. In this copy, as in Holbein's sketch, each person is identified by a Latin inscription. Reading from the viewer’s left is More’s stepdaughter Margaret Clement (née Giggs), his daughter Elizabeth Daunce, his father Sir John More in his judge’s red robes, and his ward Anne Cresacre. To the right of More is his only son John (whom Anne would marry), the household ‘fool’ Henry Patenson, More’s clerk John Harris, and, seated in the foreground, his daughters Cicely Heron and the celebrated writer and translator Margaret Roper. On the far right sits More’s second wife, Lady Alice. The young man reading by a window in the back room is unidentified. The painting came to the Winn family through Susannah Henshaw, a descendant of Margaret Roper, who married Sir Rowland Winn, 4th baronet, in 1729. It was initially stored in the 4th Baronet's London house in Soho Square, where it was viewed by the antiquarian, engraver and author, George Vertue in 1731. It was shipped to Nostell via Hull in 1742. The picture has always been a difficult painting to hang because of its size: it was noted by Dorothy Richardson, a visitor to Nostell in 1761, in the Lower Hall, still locked in its case, where it probably remained until the early 19th century. It was eventually hung in the Billiard Room c.1819 and removed to the Top Hall c.1833, where it remained over the north fireplace until 1980. It was re-framed and removed to its present location in the Lower Hall after a fire in 1980, when the Top Hall was redecorated, and the furnishings re-arranged. The much larger, Victorian frame remains in store.

By descent and inheritance from Margaret Roper, More's daughter, to Susannah Henshaw, who married Sir Rowland, 4th Baronet in 1729; brought to Nostell in 1742; purchased by the National Trust in 2002.