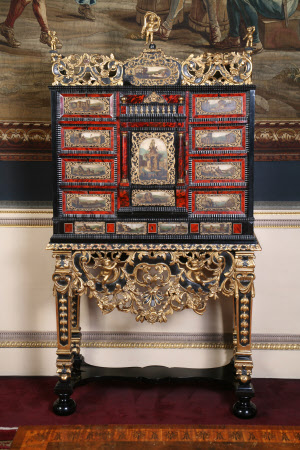 An ebony, marble and tortoiseshell cabinet, Flemish, mid- to late 17th century, on a probably later ebonized and giltwood stand. Topped by a scroll-carved gallery centred at the front with an oval painted with a landscape scene, and surmounted by three finials, each of a putto balancing atop a sphere. The cabinet of drawers surrounding a central cupboard door beneath an ebonized balustrade. The drawers inset with marble panels painted with Roman cappricios, including the Forum and the Pyramid of Cestius. The drawers edged with tortoisehell and ebonized ripple mouldings. The later ebonized and giltwood stand with a leaf-carved edge moulding above deep shaped aprons pierced with scrolls, foliage and shells. The legs tapering rectangular-section, carved with bellflowers and on ebonized bun feet, joined by a shaped platform stretcher. -- Not mentioned in the Nostell Priory inventories of either 1806 or 1818, this was almost certainly collected by Charles Winn in the 19th century.