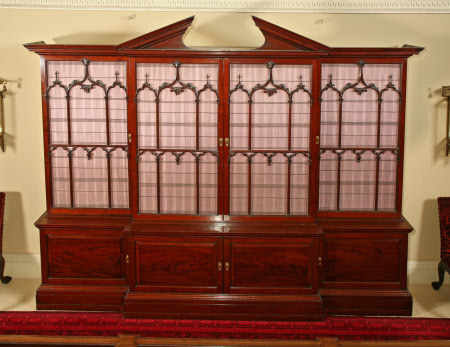 A mahogany breakfront library bookcase, English, by Chippendale & Rannie (fl. 1754 - 1766) or Thomas Chippendale (fl. working without a partner 1766 - 1771), for one of Sir Rowland Winn's (d. 1785) properties, circa 1766. Topped by a moulded cornice centred by a broken pediment, above four doors fitted with gilt brass grilles and with carved astragals forming Gothic arcades, lined with fabric and enclosing shelves. The lower section with four cupboard doors with fielded panels enclosing shelves. On a plinth base. --

This has been called a 'problem piece' by historians of Chippendale, not because they question whether he made it (it corresponds to several plates in the 1762 edition of The Gentleman and Cabinet-Maker's Director), but because it is not positively identifiable in surviving accounts and correspondence as being made for Nostell Priory. It is not the only one of its type (there are five other identical bookcases of varying widths surviving in various collections), and all bear gilt pressed brass escutcheons bearing the Winn crest (a demi-eagle, displayed, or). These escutcheons are considered to be late 18th/early 19th century additions, and so that the Winn family owned these bookcases in the 18th century is not in doubt. However, they were certainly not made for Nostell. The portrait [NT 960061] of Sir Rowland and Lady Winn, painted in 1767 immediately after the library was completed, shows the walls lined with open bookcases painted in light green, pink and white, which are still there. This bookcase and the others in the group were more likely made for Sir Rowland's London house, 11 St. James' Square, the contents of which were sold by Christie's after Sir Rowland's death in 1785. The surviving documentation relating to the first phase of Chippendale's work for Sir Rowland does not distinguish between pieces made for Yorkshire or London, and so it is possible that this bookcase corresponds with an entry in the accounts on 23rd June 1766 for 'A Very large mahogany bookcase with Glass doors and a pediment top, £38-0-0', but a question arises over the use of the singular 'bookcase' here, because there are five bookcases of this type in existence (all bearing Winn family amorial escutcheons). In addition, none of these bookcases are glazed, but instead fitted with brass grilles lined with fabric. The grilles, like the escutcheons, are thought to be later additions. An entry in an inventory of Nostell in 1805 records four 'Large Mah'y framed Aviaries of Gothic Design with brass wire fronts, drawers, Slides & partitions in 3 parts', raising the intriguing possibility that all of the bookcases, removed to Nostell after Sir Rowland's death, were re-furbished as aviaries, to house birds indoors. Why the group has been dispersed, with only one remaining at Nostell, is unclear. Some of the other five bookcases were purchased by Lord Moynihan and subsequently by Dr. Carlton Oldfield of Harewood. Several have been sold at auction. One, at the Colonial Williamsburg Foundation, betrays evidence of having been built in. It should be noted that the attribution to Chippendale is strengthened by the similarity of this bookcase to other pieces of documented Chippendale which are still at Nostell, such as a clothes press invoiced on 23rd June 1766 [NT 960196] which has a very similar pediment. This was noted in the accounts, which list a press 'with a pediment top & c. Made to Match your bookcase.' Once again, however, the use of the singular 'bookcase' here undermines the assumption that this is the bookcase to which the accounts refer.