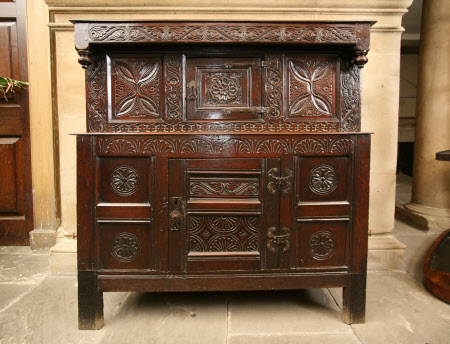 A small oak court cupboard, probably West Country, circa 1670. The upper frieze carved with leafy 'S'-scrolls and issuing a pair of turned pendant finials. The upper section fitted with a paneled cupboard door carved with a rosette within mouldings, flanked by a pair of stylized foliate-carved panels within leafy 'S'-scroll carved rails. The lower section with foliate lunette-carved toprail above a double-paneled door, flanked by four panels, each carved with a floral roundel. The front stiles with large, later tips.