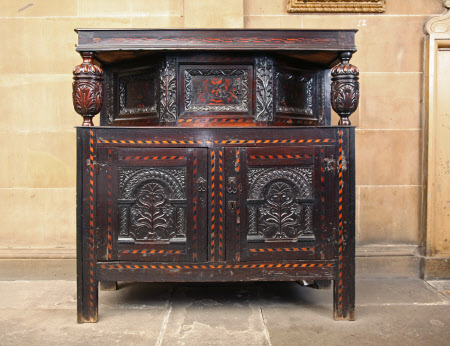 An oak and inlaid canted court cupboard, Yorkshire, mid-17th century. The upper frieze inlaid with bands of alternating light and dark inlay and raised on a pair of turned and bulbous end columns, with gadrooned covers and leaf-carved cups, flanking a canted cupboard enclosed by a door with floral marquetry inlay within a carved surround, between conforming outer panels. The lower section with inlaid rails and a pair of doors each carved with guilloche-arcade enclosing a flowering plant. With repairs.