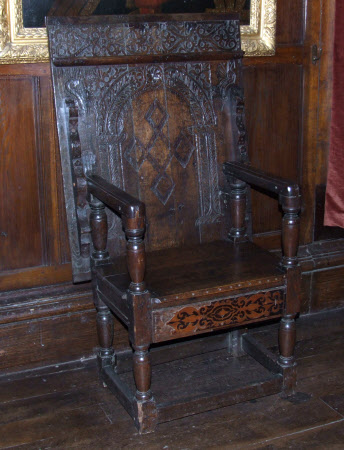 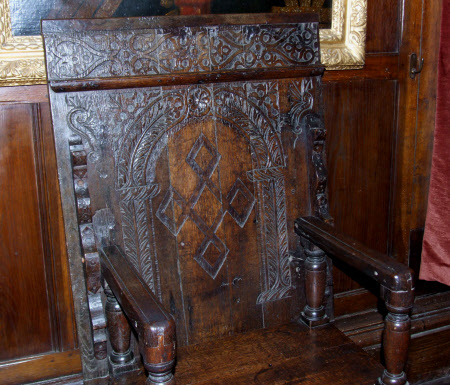 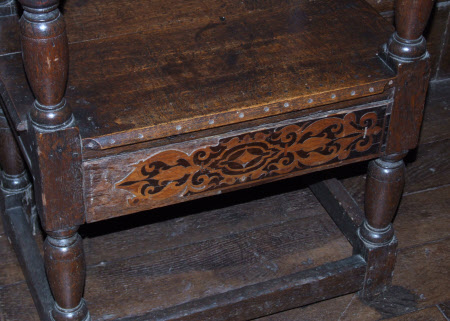 circa 1630 (the drawer later modified)

A joined oak and inlaid 'chair-table', English, early 17th century and later. The four-plank cleated table-top hinging on pintels through the arms and decorated to the underside with a central interlaced lozenge (once inlaid) beneath an arcade, with carved 'S'-scrolls simulating more typical ears, all beneath a stop-moulding and a rail carved with opposing foliate and scroll-carved 'heart' motifs. The arms with re-shaped truncated ends and raised on four block and baluster-turned supports. The boarded seat re-shaped and above a marquetry-veneered front seat rail enclosing a drawer. The front and rear legs block and baluster-turned and with rectangular-section side stretchers. -- This chair is probably early 17th century in date, but several features have led some to believe that it is a 19th century confection, made using earlier parts (Jamieson, 2004). However, the form of the base, with four baluster-turned arm supports beneath the arms, the rear pair abutting the table-top when it is angled to form the chair-back, is exactly what one would expect to find on a table-chair of this period. Indeed, a chair-table dated to circa 1630 and illustrated by Victor Chinnery bears exactly the same interlaced lozenge, arch and spandrels to its octagonal back and also has a drawer fitted beneath its seat. It is likely that this chair has undergone significant restoration (the seat boards and the drawer front, for example, are questionable) but is largely original. Probably purchased by the so-called 'Antiquarian' 9th Baronet (1826 - 91) who aimed to 'restore' Melford to something of its original character. In the Great Hall, for example, he reintroduced the dark oak paneling as well as panels of stained glass to the windows.

Probably acquired by Sir William Parker, 9th Bt (1826 - 1891) to furnish the Hall at Melford Hall in an antiquarian style. Part of the Hyde Parker Collection, and by descent to Sir Richard Hyde Parker. The hall and part of the collection were Accepted in Lieu and transferred by the Treasury to the National Trust in 1960.