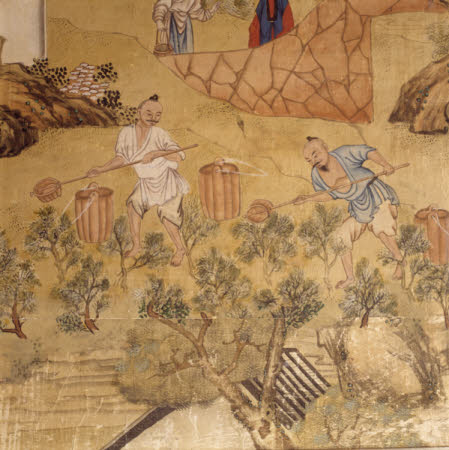 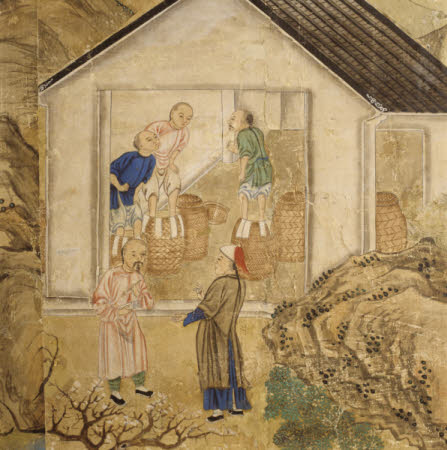 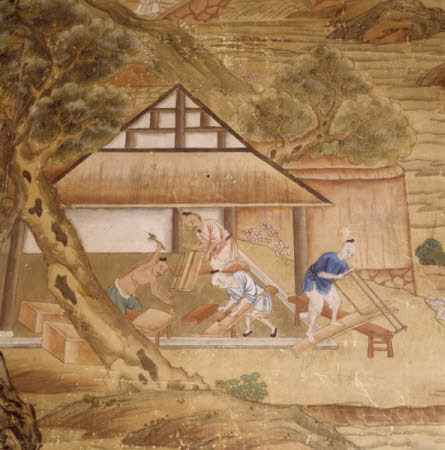 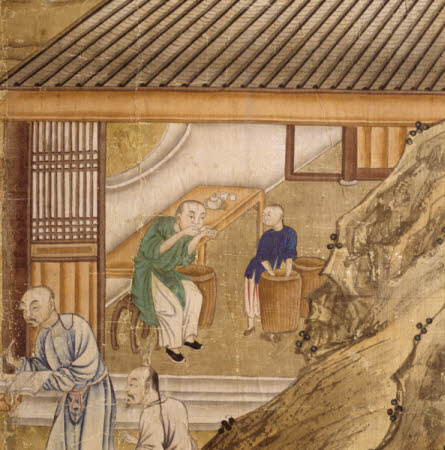 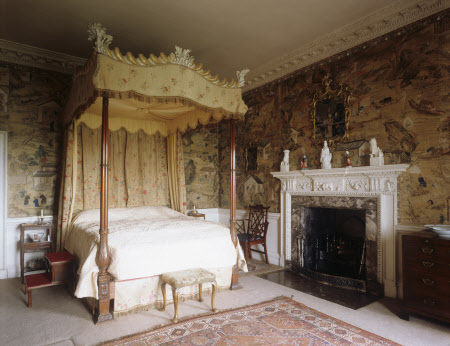 Ink and watercolours on silk

Chinese wallpaper depicting a landscape with scenes of the growing, processing and packing of tea, painted in ink and watercolours on silk, in the Chinese Bedroom.

The wallpaper appears to have been trimmed at the top, as no horizon and sky can be seen. A number of cut-out motifs from other sources have been stuck on in places. Silk is less often seen as a material for Chinese export wallpapers than paper. However, Chinese silk was of course exported to Europe for use in the fashion and furnishing trades, and certain Chinese silk painting workshops seem to have included wallpapers in their repertoire. A Guangzhou painter referred to as ‘Anthonij’ in Dutch East India Company records supplied painted silk fabrics as well as wallpapers on both silk and paper between about 1760 and 1790. There is a wallpaper with more or less identical scenery, also on silk, at Schloss Dyck, Nordrhein-Westfalen, Germany, which originally hung at Schloss Halbturn, a Habsburg seat in Burgenland, Austria, where it was probably installed in about 1765. See Emile de Bruijn, Andrew Bush and Helen Clifford, Chinese Wallpaper in National Trust Houses, Swindon, 2014, cat. 39, pp. 41–2; Emile de Bruijn, Chinese Wallpaper in Britain and Ireland, London, Philip Wilson Publishers in collaboration with the National Trust, 2017, pp. 94–7.

Probably hung during the third quarter of the eighteenth century in what came to be called the Collopy Bedroom. Following an outbreak of dry rot in the 1930s, the contents of that room were removed and stored. The wallpaper was accepted, together with the house and the rest of the contents, by HM Government in lieu of inheritance tax and allocated the National Trust in 1957. Due to limited resources only certain parts of the house could be shown to the public, so curator Nigel Neatby decided to install the contents of the Collopy Bedroom in the more accessible Blue Bow Room, henceforth called the Chinese Chippendale Bedroom (now Chinese Bedroom). The Chinese wallpaper was cleaned, relined and hung there by C.P. Sharpe in 1962–3. At this time a European stamped mark was found on the original scrim backing, but its meaning has not yet been determined. The wallpaper again received full conservation treatment, including relining, by Sandiford and Mapes in 1995.