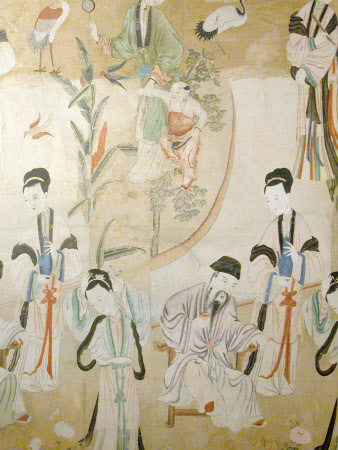 This wallpaper is thought to date from the beginning of the 18th century and is the oldest of the three types of so called 'India Paper' to be found at Saltram.This pattern is composed mainly of willowy female figures against a background of rocks, flowers and trees, all painted on mulberry paper.

Chinese wall hanging/paper of an unusually early date, painted in colours and depicting male and female Chinese figures of a type often known as 'Long Eliza' and also showing background of rockwork, flowers and trees. The entire room is covered with this paper as originally hung. On the screen dividing the room from the passageway, figures have been cut out and pasted on.