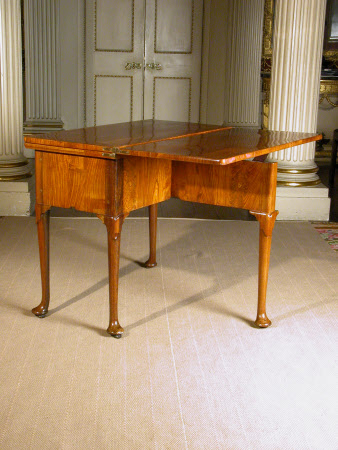 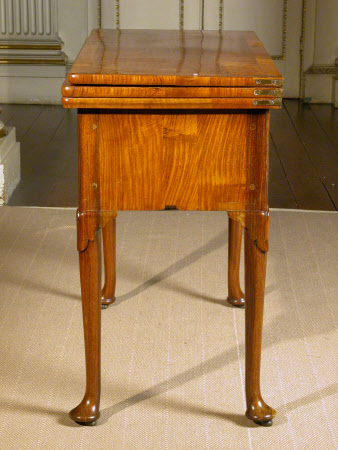 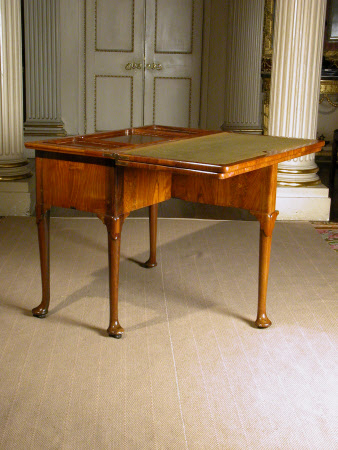 A padouk harlequin tea, writing and games table, in the manner of Thomas Potter (fl. 1737), High Holborn, London, probably made in Guangzhou (Canton), China for export to Europe. With a double-hinged top, one lined with baize, with brass hinges, and below a mechanized rising section, comprising various pigeonholes, a writing surface and compartments. The friezes with a small central arch. Raised on turned and tapering 'club' supports terminating in pad feet. The mechanism rising on the movement of a catch.

This model of table, opening to reveal its raised 'cartonnier', features in the 1730s trade-sheet of the High Holborn cabinet-maker Thomas Potter, who in partnership with John Kelsey supplied furniture to Sir Richard Colt Hoare of Barn Elms in 1738 (C. Gilbert and T. Murdoch, John Channon and brass-inlaid furniture 1730-1760, London, 1993, p.19). Albeit based on an English model, this table was probably made in Guangzhou, where there was a thriving market in furniture for export to Europe, often made to European models. A similar table at Fredensborg Castle, Denmark, probably of hauli wood, is itemised in a bill for furniture brought back from Guangzhou, dated 12 September 1737, to Christian VI of Denmark. Another harlequin table, of carved padouk, is in the collection of Petworth House, Sussex (NT 485434).

Date of acquisition not recorded, but at Saltram by 1951 and accepted by HM Treasury in lieu of full payment of Death Duty from the Executors of Edmun Robert Parker (1877 - 1951), 4th Earl of Morley, and transferred to the National Trust in 1957.