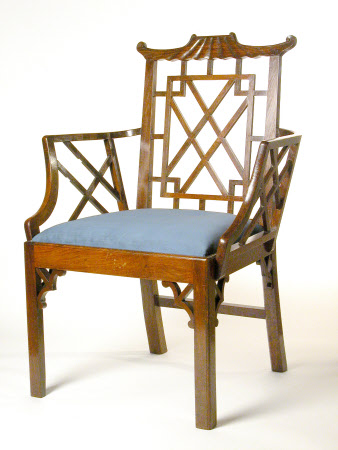 A padouk armchair, one of a near set of seven padouk chairs, Chinese Export, circa 1765. The set with minor variations in dimensions and design - NT 871346.3 significantly shorter, and possibly cut down; NT 871346.7 and .8 are armchairs. Upholstered in three different fabrics. This armchair with a gadrooned pagoda-type toprail curving upwards at both ends and terminating in scrolls. The back with slender rails forming Chinese paling comprising a central rectangle and a central saltire and squares at each corner. The drop-in seat later upholstered in blue silk and between straight arms filled with diagonal slender rails forming a lattice and with curved arm supports, attached at an angle to the outside face of the side seat rails. The seat rails plain and raised on chamfered square-section legs headed by pierced 'C'-scroll and bar spandrels. The rear legs joined by a stretcher. -- A set of chairs made in padouk, and with the same toprail and spandrels heading the legs, survives at Kenwood House. Some of the set were recorded in 18th century inventories drawn up for Lord Mansfield.

The Extraordinary in the Ordinary: Chairs for Viewing the World through Time, Hong-Kong, 7 June- 15 September 2014, p. 444