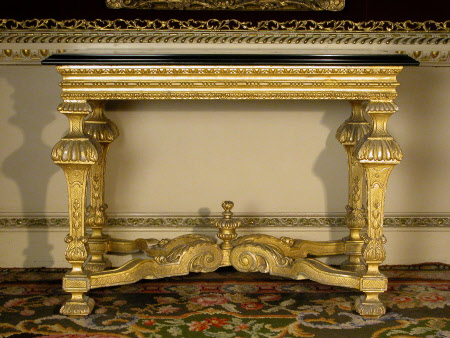 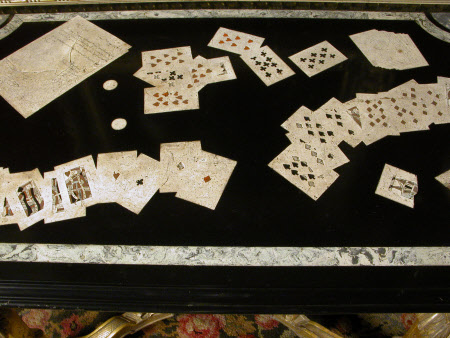 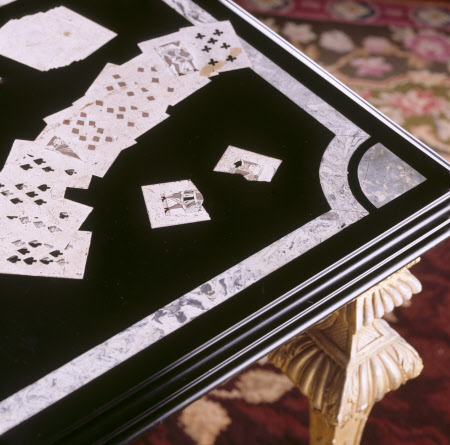 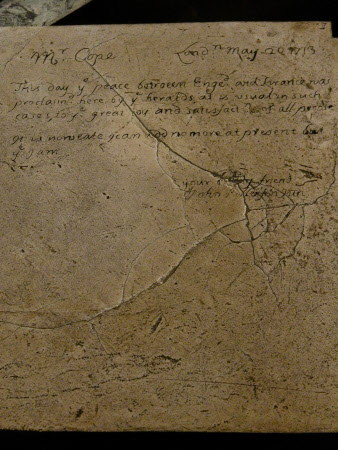 A giltwood and gesso side table, English, circa 1720, in the manner of James Moore (circa 1670 - 1726), the top dated 1713, probably by an Italian artist in England. The scagliola top with a black ground decorated with trompe l'œil playing cards, counters and a letter. The letter inscribed: 'Mr Cope Londn May 20 1713 This day the peace between Engld and France was / proclaimd here by the heralds as is usual in such / cases to the great joy and satisfactn of all people. It is now late I can add no more at present but / yt I am Your loving friend John Pollexfen Jun.' The base topped by an egg and dart-carved moulding above a frieze with central moulding carved with three beads alternating with a long bead. A run of acanthus-carved moulding below. The square-section legs each topped by a gadrooned capital above a waisted and hatched section, a further gadrooned and leaf-carved knop above the leg proper carved with a stalk of flowers against a hatched ground. The bottom of the leg clasped by a bulb of acanthus above the stretcher block and a leaf-carved square-section foot. All the legs joined by a cross stretcher formed from four acanthus-carved scrolls centred by a turned and gadrooned urn finial. The rear frieze moulded and gilt but otherwise undecorated.

The letter on this table refers to the announcement of what has come to be known as the Treaty of Utrecht, in reality a series of agreements which were signed by participants in the War of the Spanish Succession in March and April 1713. How this table, decorated with a letter signed by a John Pollexfen Junior, came to be at Saltram is unknown. It has been speculated, however, that it might have come to the Parkers via the marriage of Pollexfen Bastard of nearby Kitley in Devon to Lady Bridget Poulett (d. 1774), the sister of Catherine Poulett (1706 - 1758), who married John Parker (1703 - 1768) of Saltram in 1725. However, it is not entirely clear who John Pollexfen Junior was. It is most likely, given the interest in the Peace of Utrecht to which the table-top refers, that he was a relation of Sir Henry Pollexfen (1632 - 1691) of Sherford in Devon who was an eminent lawyer and appointed Attorney General in 1689. His brother, John Pollexfen (1636 - 1715) of St. Stephen Walbrook, began his career as a merchant, trading in wines from Portugal and in 1686 bought the Manor of Wembury in Devon. He sat on the Committee on Trade and Plantations and was a member of the Board of Trade between 1696 and 1709. He advised the English Government on matters colonial and produced reports on the judicial system of Barbados and advocated a unified military command for the American colonies. As a by-product of his public career, Pollexfen published a series of political and economic essays. That this John Pollexfen would be joyful at the declaration of the Treaty of Utrecht is not unlikely; in 1700, a John Pollexfen signed a letter asking for missionaries to be sent to the Iriquois in North America. Sir Henry Pollexfen had a brother called John Pollexfen but he, in turn, also had a son called John, who may be the John Pollexfen 'Junior' to whom this table refers. The latter matriculated at Trinity College, Oxford in February 1691.

Date of arrival at Saltram not recorded, but at Saltram by 1951 and accepted by HM Treasury in lieu of Death Duty from the Executors of Edmund Robert Parker (1877 - 1951), 4th Earl of Morley.

Table top: 'Mr Cope Londn May 20 1713 This day the peace between Engld and France was / proclaimd here by the heralds as is usual in such / cases to the great joy and satisfactn of all people. It is now late I can add no more at present but / yt I am Your loving friend John Pollexfen Jun.'