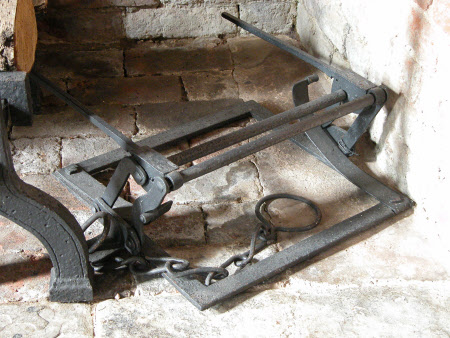 Humane mantrap with no teeth.

Leg-Hold traps such as these were first developed in the 1600s for the purposes of preventing poachers or trespassers gaining access to the land on private estates. This coincided with the trend of increased land enclosure of common lands by members of the gentry. Later, by the 1700s, iron leg-hold traps were being made by blacksmiths for the purpose of animal trapping. This trap would have been used as a man trap rather than an animal trap. It is supposedly referred to as a 'humane' man trap as the jaws do not contain any teeth, thus not lacerating the leg of those caught in it. Instead it would hold the leg in place or perhaps even break a bone if it closed forcefully. Traps such as these were banned by an act of Parliament in 1827 if used to restrict access to the land, but they were still permitted for use in the home during the night in order to deter burglars.