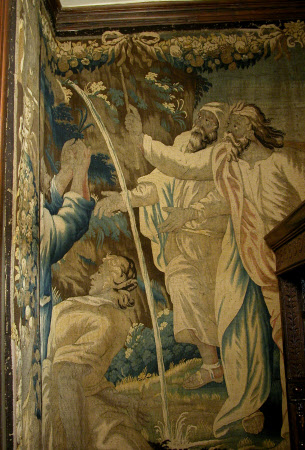 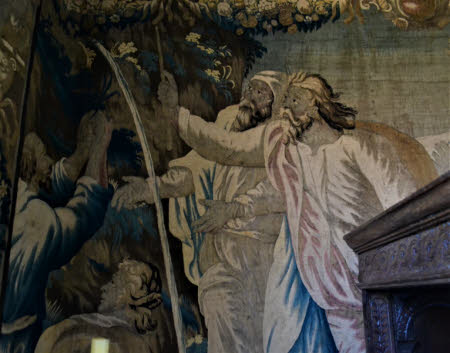 Tapestry, wool and silk, Moses Striking the Rock, Philip or Michiel Wauters, Antwerp, c. 1660-1680. To the left of the scene Moses, in a long flowing cloak, strikes at a rock face with his staff and a fountain of water bursts forth. The surrounding elders clasp their hands or raise their arms to heaven in awe. The tapestry has garlands of fruit and putti in the side borders and swags of fruit and flowers along the top.

The event took place during Moses’s journey from Egypt with the Israelites. When they reached Rephidim they had no water to drink, and began murmuring against Moses. After asking the Lord for help, Moses stood upon the rock of Horeb in the presence of the elders and smote the rock with his staff, bringing forth water (Exodus, 17). ‘Moses Striking the Rock’ comes from a series of the ‘Story of Moses’ produced in Antwerp by the brothers Philip and Michiel Wauters after designs by Abraham van Diepenbeeck. The series is mentioned more than once in the correspondence of the Wauters brothers, including a letter from Philip Wauters in 1676 that give the designer as Diepenbeeck, and another of 1675 stating that the cartoons for the series cost over 1,000 guilders (Denucé 1931, pp. 195-7, 199). The posthumous inventory of Michiel Wauters included two ‘Moses’ tapestries and nine cartoons (Denucé 1932, pp. 300, 302). A set of six ‘Moses’ tapestries in Durham Castle bears the monogram of Philip Wauters, and includes a weaving of ‘Moses Striking the Rock’ after the same design as the Ightham Mote tapestry (Marillier Tapestry Archive, note by Wendy Hefford; http://www.durhamworldheritagesite.com/architecture/castle/intro/north-range/senate-rooms). Another set was at Welbeck Abbey (Marillier Tapestry Archive). Steadman mentions a set of ‘Moses’ tapestries in the Kunsthistorisches Museum, Vienna, which he speculates to be after van Diepenbeeck’s designs, however it has not been possible to ascertain which set he was referring to (Steadman 1982, p. 47). (Helen Wyld, 2013)