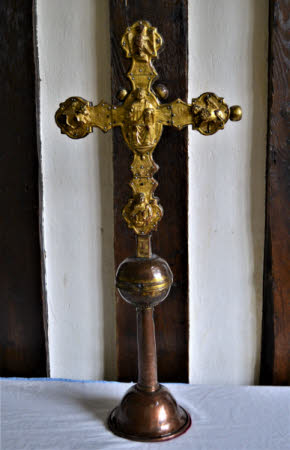 A 15th-century Lombard copper-gilt processional Cross, with on the front the Crucified Christ and on the four lobes, at the top Saint John the Evangelist holding his Gospel, at the sides the grieving Virgin Mary and Saint John, and below Mary Magdalene with a jar of ointment. On the reverse is in the centre God the Father and at the four ends, clockwise from the top, the symbols for Saints, John the Evangelist, Mark, Matthew and Luke. The sheet copper elements engraved with foliate decoration and light radiating out from Christ and God the Father. Large copper-gilt beads attached to the Cross, only three surviving, but there must originally have been at least seven, around Christ and at the ends of the Cross. The Cross appears to have been much repaired, with many replacement nails. Fixed to a gilt-copper knop and ferrule, with a modern foot. The Cross itself is made of sheet copper applied with nails to a wooden core. The copper sheets are engraved and gilded. The figural elements are all cast separately, gilded and applied to the Cross.

The Cross is close in style to a group of Crosses that are mainly found in the Como region north of Milan, and appear to be products of a Lombard workshop. Its distinctive outline shape is very similar to those of a mid-fifteenth-century Cross in a private collection (Oleg Zastrow, Croci e Crocefissi. Tesori dall’VIII al XIX secolo/Crosses and Crucifixes. Treasures from the 8th to 19th century, Milan 2009, pp. 124-32, no. XVII; see also another Cross of similar design in the same collection, ibid., pp. 160-64, no. XXIII) and to a further group of closely comparable Crosses (Oleg Zastrow, Capolavori di oreficeria sacra nel Comasco, Como 1984, pp. 27-35, 38, nos. 6-20, 23). Many of these Crosses also have numerous applied spheres similar to the three that survive on the Ightham Mote Cross, and several also have similar applied INRI tablets above Christ’s head. There is considerable variety in the decoration and figures on these Crosses, so they are unlikely all to be the products of a single workshop. Jeremy Warren (December 2017)

On a tablet attached to the top of the Crucifix on which Christ is crucified: I.N.R.I.