Triptych: The Way to the Cross (Calvary) (left wing); The Entombment of Christ (Lamentation) (centre); The Ascension (Resurrection) (right wing) 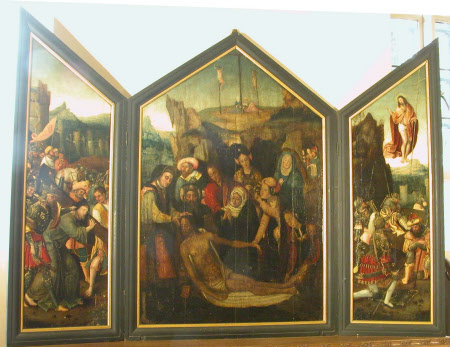 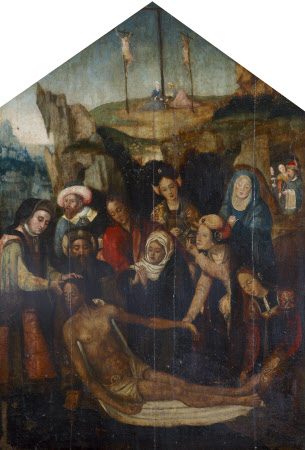 Oil on panel and wood

This is a religious altarpiece, or triptych, because of its three parts. The central panel shows Christ’s body, wrapped in linen, being supported by Joseph of Arimathaea, with Mary Magdalene at his feet. The other mourners include the Virgin, held by John the Evangelist. It is the lamentation part of the narrative; the crosses are on the hill behind and the tomb, carved out of the rock, can be seen with figures at its entrance in the middle distance. The centre scene is a copy of the high altar of O. L. Vrouwe-kerk in Antwerp by Quentin Metsys (c.1460/66- 1530) painted in 1509/10 but the subject of the wings differ. Here the left wing shows Christ on his way to Calvary, or Golgotha, the place of the Crucifixion, and the right wing shows a Northern Renaissance rendering of the Resurrection, which occurred three days after Christ’s death; the soldiers, guarding the entrance to the tomb, but asleep, are present. It looks like an Ascension, as the title suggests, as Christ is seen here floating upwards in the air, but that happened forty days later in front of the apostles.