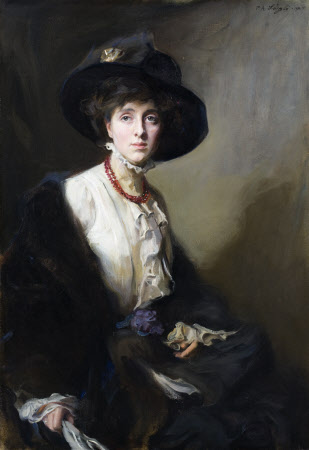 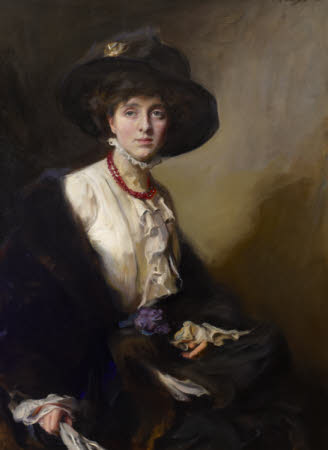 This portrait was the first painted of Vita Sackville-West, when she was a few days short of her 18th birthday. It is by the fashionable Hungarian society portrait painter, Philip de László, who had only settled in England three years earlier. Vita's mother, Lady Sackville, commissioned the portrait and asked for to be painted wearing a big hat and a fur. De László thought that this would detract from Vita's youthful appearance and had originally produced a décolletage sketch that did not meet Lady Sackville’s approval. Vita is said to have hated the picture for what she saw as its Edwardian vacuity and during her lifetime it remained in the attic.

Oil painting on canvas, Victoria (Vita) Mary Sackville-West, Lady Nicolson (1892-1962) by Philip Alexius de László de Lombos (Budapest 1869 – London 1937), signed, top right: P.A. Laszlo 1910 III. A half-length portrait of a young woman, seated, gazing into the distance, wearing a fur stole, a cream high-necked ruffled blouse, amber beads, a dark skirt with a mauve rose at the waist, and a broad-brimmed hat. A photograph of the artist is pasted on reverse. Having married Lucy Madeleine Guinness in 1900, László settled in London in 1907, preparing his arrival with an exhibition at the Fine Art Society. He was immediately rewarded with commissions to paint Edward VII, Queen Alexandra, and Princess Victoria. Lady Sackville was thus, characteristically, in the vanguard of fashion, in commissioning this portrait of her daughter – which the latter came to hate, and relegated to the attic – from him. Vita presumably preferred the portrait by Clare Atwood, now at Smallhythe, of her dressed for the 1910 fancy dress ball at Knole in the scarlet Venetian legal robes that Ellen Terry had worn as Portia in The Merchant of Venice (NT 1118225).

Accepted by HM Government in lieu of inheritance tax afther the death of Nigel Nicolson OBE (1917 – 2004), and allocated for display at Sissinghurst Castle, 2007.

Sissinghurst Castle, The Nicolson Collection (accepted in lieu of tax by HM Treasury and allocated to the National Trust in 2007).